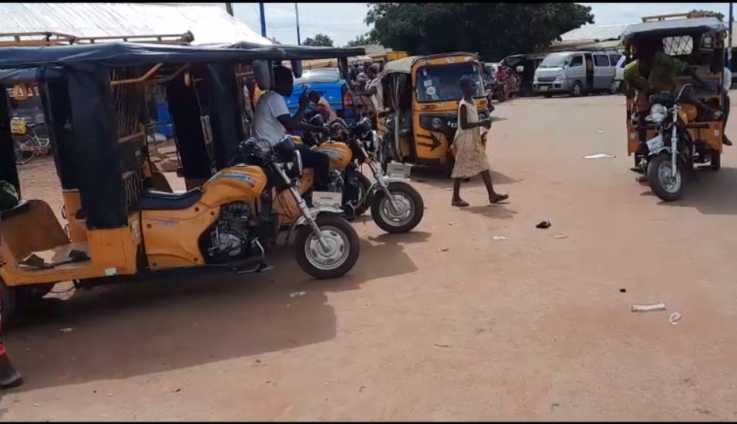 The Director-General of the National Road Safety Commission, Ing. May Obiri Yeboah, has predicted an upsurge in road traffic crashes in the North East Region.

“Now that this place has become a new region with a capital and everything, what we used to see in our towns is going to change.

“More people are here, more vehicles, motor kings and the motorcycles are now going to move and probably there may be a lot of accident”, Mrs. Obiri Yeboah said.

The Director-General also reteriated the ban on minors and children engaging in commercial tricycle operations in the region.

According to Mrs. Obiri Yeboah, her outfit in collaboration with the police are to embark on a strict enforcement of road traffic regulations in the area in order to reduce road crashes.

The Authority, she added, will also intensify road safety education and sensitization in communities and public centres after which road traffic offenders will then be arrested to face prosecution.

The Director-General of the Authority, Ing May Obiri Yeboah, was speaking on Tuesday in the regional capital, Nalerigu, when she paid her first official visit to the region since its creation almost three years ago.

Amongst her activities in the region, the Director-General also attended a stakeholders’ meeting organized by the regional authority on road safety situations and challenges.

“So my second reason for coming is to see the Overlord and the Regional Ministers and to find out how you can support our regional staff, so that we can put in system that will protect the people from road accidents. So we need your support in that direction,” the Director-General said in her address to the Overlord.

“I know that now that we have come here there will be some restrictions and the things that people were just doing freely, now we will have to tell them what the law says and all that”.

“So it will get to a time people will think we are stepping on their freedom but this is to protect live and property. So we will want that when it happens like that, the Overlord and all the elders will be behind us so that we can preserve the lives of the people in this region”.

The Director-General also expressed concern over the practice of minors engaging in commercial tricycle operation and called for support from the traditional leaders and other stakeholders to end the menace.

“One or two things I will put forward is that, those who are underage riding the motorcycles and the tricycles, we will have to talk to them so that they stop, and those who have not registered their motorcycles, we encourage them to do, and then also the use of the helmet”.

The Overlord through his senior elder, Mba Taraana, welcomed  the Director General of the Road Safety Authority and was thankful to her  for the visit.

The King was excited about the changes being put in place to check road crashes in the region, particularly, the announcement to stop minor drivers  from engaging in commercial driving.

“The Overlord says he is prepared to support in whatever way”, Mba Taraana assured the Director-General.

“You protecting life is a plus for him”, he continued, “because he is always there for the people and whatever is good for the people he would ensure that it is done. So this is one thing that he would add his support in whatever capacity he can to make sure that our roads are safe for us, the pedestrians and vehicular users. So we are very grateful”.

Mrs Obiri Yeboah also paid a visit to the  newly established office complex for the Authority located at the Nalerigu bus terminal.

From there, the Director-General attended a forum which was held at the Regional Coordinating Council.

The forum brought together stakeholders in the road transport system, including officials from the security services, transport unions and drivers’ associations in the regional capital.

Acting Regional Director of the Authority, Abdulai Bawa, who opened the forum stated that, this year, the region has recorded over 60 road accident-related deaths.

The Regional Director also identified bad roads, underreporting of crashes as some of the challenges to road safety interventions in the region.

Also at the meeting was the Regional  Minister, Yidana Zakari, who pledged his support to the efforts by the Road Safety Authority to minimize the rising state of road accidents.

“We all know what it means when you lose a breadwinner of a family. And those between the ages of 18 and 55 years are heads and breadwinners of families. And I believe that if we do things right, we can avoid some of these accidents”, the Minister said.

The Minister also voiced his worry over underage driving and called on the relevant institutions to ensure all minors are stopped from commercial driving.

“We need to get the minors back to school”, Mr. Yidana said.

“So this goes to the leaders of the Yellow Yellow association, you are the ones to help us to get the minors back in school. If they won’t get back to school, let’s get them off the streets. We will help you to do your work.”

The commander, however, cautioned that the police will begin a strict implementation of road safety regulations and and anyone found flouting the rules will be dealt with.