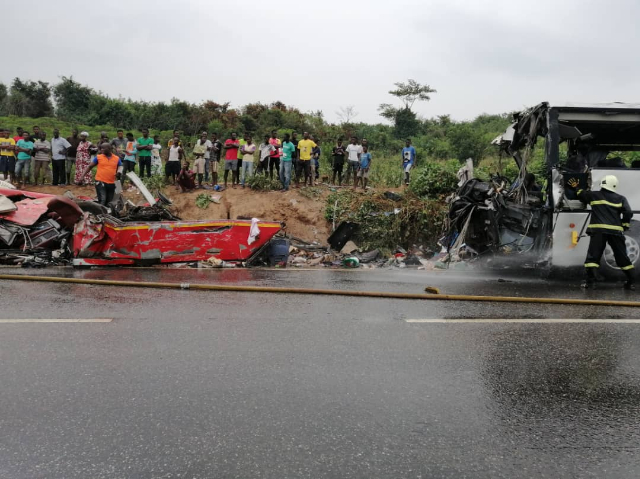 Sometime last year, I went out with some friends for a drink.

A friend had arrived from the UK on holiday and a few mutual friends decided to hang out and enjoy ourselves.

My UK-based friend opted for orange juice. Collectively, as if on cue, we all turned to look at him quizzically when he placed his order.

As far as I could recall, he was not teetotaller, unless of course he had found Christ in the time we have not been in contact and I was not aware.

As if he had read our questioning mind, he offered “Oh, I am driving”.

Then the penny dropped. He had arrived from England. Of course.

The horrific accidents that occurred on our highways recently brought to my mind this interesting experience. Our road safety record is nothing to write home about.

According to the World Health Organisation (WHO)’s 2017 data, in the global index of countries where you stood a risk of dying through road traffic accidents, we placed 31st out of 189.

We are a nation of laws. And by that, I mean we have laws to cover literally every facet of our lives.

On road safety, the list is as long as the distance between Kasoa and Jerusalem.

We have detailed laws on speed limits, on seat belts, on child security/strapping, tools to be carried in a vehicle, driver licensing regime, road worthiness-you name it, we have it.

It is on the little matter of enforcement that we seem to have a major challenge. And this is pervasive across all sectors of our national life.

My friend had clearly ingested UK systems and habits and knew the consequences of drink-driving. He knew the law would come down hard on him and he could even lose his licence.

He had transposed his internalised behaviour to Ghana.

Then it hit me. Perhaps if he remained in Ghana for a few months, he would probably ‘go native’, so to speak.

And the thought filled me with some dread.

One of the things I find most laughable about our attempts to enforce speed limits is the spectacle of police personnel lurking around bends on major highways, pointing speed guns at speeding motorists.

I find it laughable because in almost every instance, when the offending motorist is pulled over, negotiations take place and the offender is left with a stern warning to go and sin no more, which of course is almost invariably ignored.

You are then able to escape their clutches when you get into the vicinity, after which you are free to speed off like a maniac.

If we are serious about making a difference, we need to invest more in removing the human element from enforcement as much as possible to avoid enforcement officers from being compromised.

This means investing heavily in technology, among others. For instance, in this day and age, speed guns are clearly obsolete equipment. Luckily, we do not have to re-invent the wheel but simply borrow from best practices.

There are several factors that lead to road accidents, including poor road design, bad roads, poorly-lit roads, mechanical failure, driver negligence, poorly-qualified drivers and many more. We may not get to the point where we record zero casualties on our roads.

But we must get to the point where, through a combination of public education and a morbid fear of the law if caught, a trotro driver’s mate who is not qualified would not dream of moving the vehicle or like my friend from England, a driver would stick to water or orange juice because he is driving.

It is human nature to try to get away with as much as one can. Equally, it must be the duty of the state to make sure that infraction of the law has very unpleasant consequences, else we are getting nowhere.

And by unpleasant consequences, I do not mean the payment of a bribe.