Russia says it has carried out its first-ever joint air patrol with China, prompting both South Korea and Japan to send jets in response.

The Russian defence ministry says four bombers, supported by fighter jets, patrolled a pre-planned route over the Sea of Japan and the East China Sea.

Japan has protested both to Russia and South Korea over the incident.

The alleged incursion happened over the disputed Dokdo/Takeshima islands, which are occupied by South Korea but also claimed by Japan.

South Korea says Russian and Chinese planes entered the Korea Air Defence Identification Zone (KADIZ) on Tuesday morning – and that a separate A-50 Russian warplane twice violated its airspace near the islands.

Russian and Chinese bombers and reconnaissance planes have occasionally entered the zone in recent years, but this is the first incident of its kind between Russia and South Korea.

What does Moscow say?

They were supported by fighters and A-50 and Kongjing-2000 airborne early warning and control aircraft.

At one point the patrol became a “single airborne formation consisting of a line of pairs of planes flying within 3-4km [around two miles] of each other”, Lt-Gen Sergei Kobylash said in a televised statement.

While performing their task, he said, they were followed by foreign fighters 11 times.

He accused South Korean pilots of performing “dangerous manoeuvres” in the vicinity of disputed islands, “crossing paths with the aviation group and creating danger for the safety of the flight”.

He said the South Korean jets had fired decoy flares. 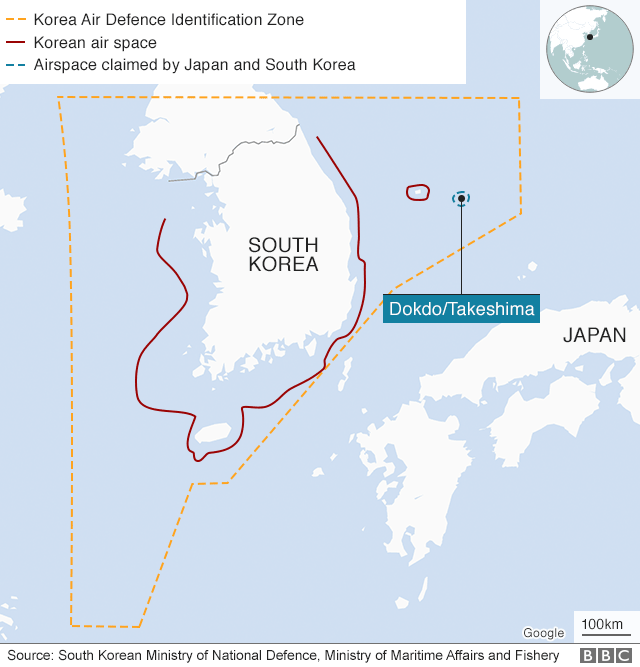 The patrol, he said, had been more than 25km away from the Dokdo/Takeshima islands, and he accused South Korean pilots of “hooliganism in the air”.

He said Russia had complained to the South Korean military about its crews’ “illegal and dangerous actions”.

What does South Korea say?

South Korean F-15 and F-16 planes were deployed to intercept them. 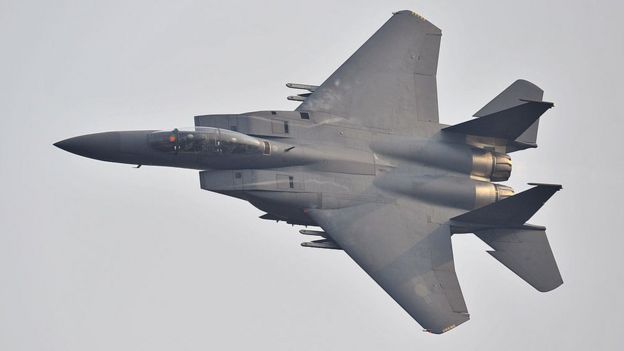 The military said it had fired 10 flares and 80 machine-gun rounds during the alleged first violation.

It said a Russian A-50 plane had left and then re-entered South Korean airspace – to be met by 10 more South Korean flares and 280 machine-gun rounds.

The head of South Korea’s National Security Office, Chung Eui-yong, has lodged a strong objection with the Security Council of Russia, and asked the council to take appropriate action.

“We take a very grave view of this situation and, if it is repeated, we will take even stronger action,” the South Korean president’s office quoted Mr Chung as saying.

South Korea has also protested to China. Beijing has insisted South Korea’s air defence identification zone is not territorial airspace and so all countries can move within it.

And how about Japan?

The government in Tokyo has lodged a complaint against both Russia and South Korea.

Because it claims sovereignty over the islands, Japan’s government said that Russia had violated its airspace.

It also said that South Korea’s response had been extremely regrettable.

What are these defence zones?

An air defence identification zone (ADIZ) is an airspace which a country seeks to monitor on grounds of national security. Overseas aircraft should identify themselves before entering an air defence zone.

An ADIZ usually extends well beyond national airspace to allow for sufficient warning of a potential threat.

But ADIZs are not governed by international law and the self-defined boundaries can be disputed or overlap with other countries’ claims, which may lead to violations. This is the case in the East China Sea region, where South Korea, China and Japan all have overlapping ADIZs.

Meanwhile, under UN conventions, countries control airspace above their territory and territorial waters (up to 12 nautical miles from the coast).

In this case, South Korea says Russia went beyond its ADIZ and into the territorial airspace surrounding the islands.

But other nations do not recognise South Korea’s claim of sovereignty.