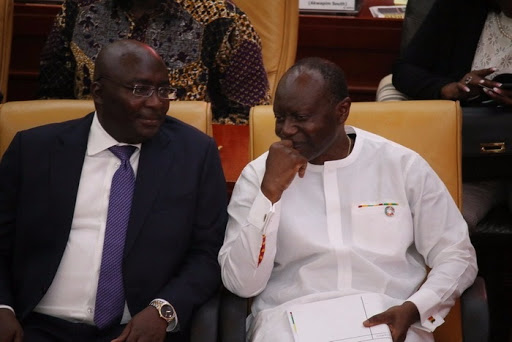 According to the party, these two key members of the NPP government are “villains” who are wreaking havoc on the economy.

Speaking at a press conference on Wednesday, NDC’s communication Officer, Sammy Gyamfi said getting rid of these men and replacing them with abled individuals would help breathe life back into the economy.

“President Akufo-Addo’s cousin (Mr Ofori-Atta) has run down our economy through excessive borrowings that his personal company Databank profits from. Today, his name scares away investors and evokes a feeling of insecurity for every Ghanaian.”

“Regardless of our running to the IMF, the only way to begin the process of rebuilding, if we are to get any good deal from the IMF is to sack Ken Ofori-Atta immediately and appoint a fresh, able hand in his stead to lead the IMF negotiations,” he said.

On Bawumia, Mr. Gyamfi stated that the Economic Management Team has been reduced to a gaseous team who have deserted their roles in these difficult and critical times.

“It is about time our tired, clueless and incompetent Vice President is finally relieved for new ideas and competent hands to take over and steer the Economic Management Team at this time of unspeakable hardships,” he added.

This is not the first time people have called on the Finance Minister to resign from his post. The calls followed the high cost of living that is having an impact on Ghanaians.

Among other things, the NDC at their press conference blamed the economic crisis on the numerous taxes on petroleum products, the e-levy and the depreciation of the cedi.

Mr. Gyamfi said that “the truth of the matter is that the economic mess we have on our hands has largely been brought about by the reckless spending, excessive borrowing and crass economic mismanagement by the Bawumia-led Economic Management team.”

He called on government to repeal the “obnoxious and counterproductive” E-levy Act of 1.5% on momo and other electronic transactions and the “punitive” COVID-19 levy of 1% on the VAT Flat Rate and the National Health Insurance Levy.

He also advocated for the “immediate scrapping of crippling fuel taxes such as the Special Petroleum Tax that has outlived its usefulness, the needless Sanitation Levy (“BORLA” tax ), and the new Energy Sector Levy of 20 pesewas per litre of diesel and Petrol and 18 pesewas per kilogram of LPG. “