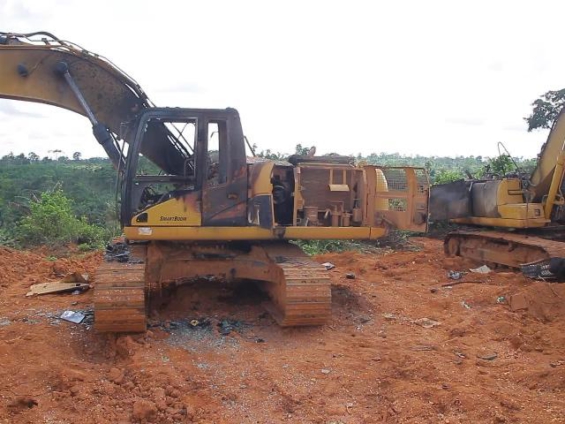 The Small Scale Miners Association is unhappy with the Lands and Natural Resources Minister’s handling of the Akonta Mining Company’s operation in the Nimiri Forest in the Western Region.

It will be recalled that the Ministry cited the company for engaging in illegal mining and asked the company to halt its activities.

According to the Small Scale Miners, their members are either arrested or have their machines burnt and wondered why the same action was not taken against Akonta Mining firm.

A member of the Association, Kwaku Duah in an interview with JoyNews described the Minister’s action as unfair.

“We are asking why Akonta Mining, which belongs to Wontumi was just informed by the Forestry Commission to move from there. If it should be so, why didn’t the Minister tell our members to leave where they are mining and burnt our machines?

“No one is above the law, so why don’t the Minister himself and the Operation Halt go there and sack him?” he asked.

Speaking on Wontumi TV on Monday, October 3, Chairman Wontumi said he is ready to make the documents available.

“I have a large scale company which Akonta mining is under… All the required documents I have, I will make all available [sic],” he added.

Mr Wontumi thus rejected accusations that he is involved in galamsey.

“I want to tell the public that I am not into galamsey,” he insisted.

But the Minerals Commission of Ghana rejected the claims by Chairman Wontumi.

The Commission in a statement said Akonta Mining firm has no mining lease, mineral right, and/or permit to undertake any mining operations in the Tano Nimiri Forest Reserve or any other reserve.

According to the Commission, the mineral leases granted to Akonta Mining Limited fall outside the Tano Nimiri Reserve, and thus documents purporting to indicate otherwise should be treated with the contempt they deserve.

DISCLAIMER: The Views, Comments, Opinions, Contributions and Statements made by Readers and Contributors on this platform do not necessarily represent the views or policy of Multimedia Group Limited.
Tags:
Akonta Mining Ltd
Lands Minister
Small Scale Miners Association