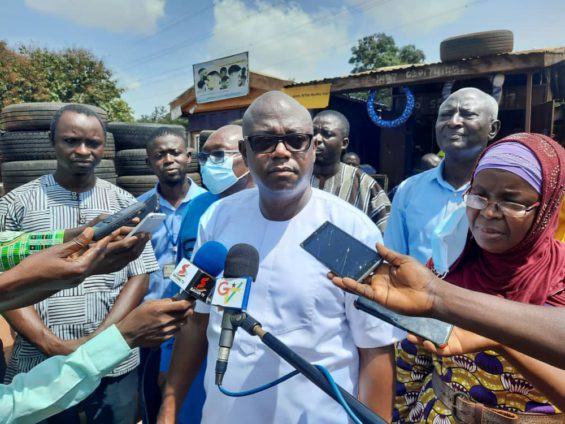 The Tamale Metropolitan Assembly has begun an exercise to restore the town as the cleanest city in the country.

Tamale has in the past has been voted three consecutive times by the Ghana Tourist Board as the cleanest city in Ghana but that pride in the last years has been lost.

It is against this backdrop that the new Mayor Sule Salifu has begun the exercise to raid the city of filth.

Tamale metropolis, like any big city, has its peculiar challenges when it comes to sanitation. The problem is exacerbated by uncontrolled urban growth.

In recent times, there has been loads of garbage along the Tamale sports stadium stretch which many had described as hazardous because of the health risks it poses to traders and people who patronize the VIP lorry park.

Trash could also be located at various vantage points in the Metropolis where bins were recently kept to curb littering.

Several other toilet facilities with trash bins had overflowed to their brims with imposing stench for those leaving in these communities.

But over the week, the Tamale Metro Assembly and Zoomlion have begun evacuating these filths from the city and providing bins at dumping sites without litter bins. They have also begun distributing bins to food vendors and store owners in the city.

Speaking at one of the waste bins distribution centers, the Mayor said the assembly alone cannot raid the Metropolis of filth unless it forms synergies.

He said it will be a wasteful effort if they do not provide litter bins and evacuate the filth.

“It will not make sense to evacuate all the waste and will not provide litter bins, they will still dump it anyhow,” Mr Sule said.

Mr Sule said shop owners who received the bins will pay a token to Zoomlion for its evacuation when they are full, adding that the pay-as-you-dump policy will be introduced for those who will patronize the bigger containers at the community level.

“We are not leaving the containers here for free, people will have to pay to enable Zoomlion to provide the needed logistics for its evacuation, so it is not for free,” he said.

The Mayor said it will help sustain the exercise and ensure the city remains clean. He reiterated the need for teamwork to make gains, adding that consultations have been made with the various stakeholders and have received the buy-in of chiefs and assembly members.

“Consultation is key in this enterprise, if we want to say that we are the Tamale Metropolitan Assembly officers so we can do it alone, these are some of the problems we are going to encounter. That is why we informed the assembly members before we moved into the communities. We went to the chiefs and they all agreed. If enough consultation is done with the people, am sure the stakeholders will not fail,” the Mayor added.