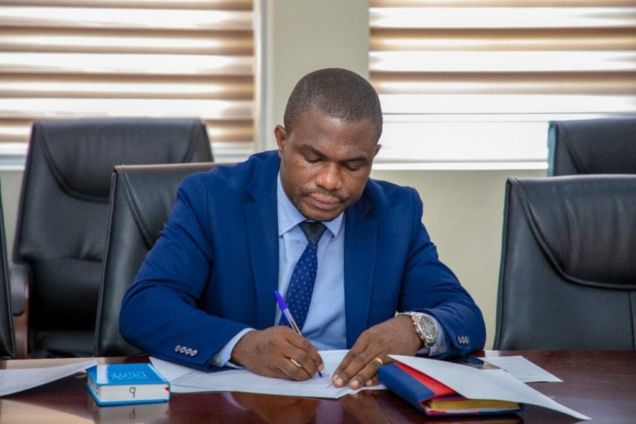 The teacher unions in the country are divided over the suitability of Dr. Eric Nkansah as acting Director-General of the Ghana Education Service (GES).

The government appointee is facing stiff opposition from the National Council of the Ghana National Association of Teachers (GNAT).

GNAT has given an ultimatum till November 4, 2022, for President Akufo Addo to revoke his appointment.

“…the Council finds the replacement of Prof. Opoku Amankwa with Dr. Eric Nkansah, a banker, not only as unfortunate but untenable.

“The Council calls for the revocation and subsequent appointment of an educationist to occupy that position by November 4, 2022,” General Secretary of the Council, Thomas Musah announced at a press conference.

Also, the Coalition of Concerned Teachers, Ghana has threatened strike action by November 4 if the President fails to revoke Dr. Eric Nkansah’s appointment.

They argue that the newly appointed GES D-G is not an educationist and has no teaching experience, thus, they are not ready to work with him.

“We’re asking the Minister to advise the presidency that a wrong has been made, for it to be corrected. We are saying that if by the end of next week Friday, Dr Eric Nkansah continues to be in office as the DG of GES, there will be an industrial unrest within the GES,” President of the Coalition, King Ali Awudu told the media.

However, the Teachers Forum disagrees with this call by the other teacher unions.

President of the group, Michael Mensah who paid a courtesy call on the Director General on Monday urged all teacher groups to support Dr. Eric Nkansah.

“I will want the teaching fraternity here in the country to come together for all of us to rally our support behind him because we know he is capable of delivering to the expectation of all, because quite a few days after he was appointed, we have seen what he has been doing,” he said.

According to Mr. Mensah, the claims that the acting Director General has no teaching experience cannot be substantive because he has been a lecturer for over twelve years.

“He is a true educationist. Somebody who has taught at the basic level and also taught at Kintampo Senior High School and then he has been a senior lecturer of good standing at the university for twelve good years,” he noted.

With these experiences, the Teachers Forum believes Dr. Eric Nkansah is “more than qualified and capable of spearheading the affairs of the Ghana Education Service.”

DISCLAIMER: The Views, Comments, Opinions, Contributions and Statements made by Readers and Contributors on this platform do not necessarily represent the views or policy of Multimedia Group Limited.
Tags:
Dr. Eric Nkansah
GES
GNAT
Teacher Unions