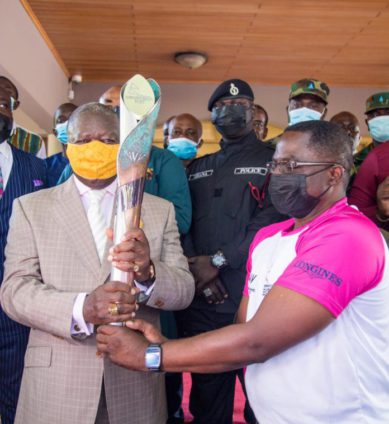 The Queen’s Commonwealth relay Baton has arrived in Kumasi, the capital of the Asante Region, as part of country-wide visits to promote the 2022 Commonwealth Games in member countries.

Asantehene Otumfuo Osei Tutu II received the delegation at the Manhyia Palace ahead of the sports event slated for Birmingham, United Kingdom.

President of Commonwealth Games Association, Ghana, Ben Nunoo Mensah, who led the delegation, presented the Baton to the Asantehene and explained the history and significance of the Queens Baton Relay.

The Baton was received from the Manhyia Palace at a special ceremony at the Rattary Park in Kumasi before it was paraded in Bonwire and other principal streets of Kumasi.

The Ashanti Regional Minister (Simon Osei Mensah), Kumasi Mayor (Sam Pyne), the GOC-Central Command, the Media and former national athletes participated in a special ceremony at the Rattary Park to receive the Baton.

The ceremony was addressed by the CEO of Rattary Park, Isaac Owusu. He used the opportunity to remind the public of the importance of the Commonwealth games to Ghana and the rest of the World.

“We all know the importance the World gives to Commonwealth games, and Ghana is not an exception, not forgetting the passion in which the people of Kumasi take sports in particular. Therefore hosting a programme like this here in Kumasi and the Rattray Park, in particular, should make us all proud.’

Himself a distinguished sports personality; Isaac Owusu took the time to enlighten his guest about the significance of sports and recreational activities, which he said is the secret to long life.

“Recreation refers to all those activities that people choose to do to refresh their bodies and minds and make their leisure time more exciting and enjoyable.

“Our facility here at the Rattary Park affords you the opportunity to take part in recreational activities including walking, swimming, meditation, reading, playing games and dancing.

“So we are happy that the Rattary Park was chosen as one of the palaces where the Queens Relay Baton visited in the Ashanti Region.”

The Queen’s Baton was brought from Sierra Leone by Alie Gibril Koroma.