‘The selfie that revealed I was a stolen baby’

In April 1997 a woman dressed in a nurse’s uniform walked out of a Cape Town hospital carrying a three-day-old baby taken from the maternity ward as the baby’s mother lay sleeping. It was only by chance, 17 years later, that the stolen child discovered her true identity.

It was the first day of term at Zwaanswyk High School in Cape Town and the beginning of Miché Solomon’s final year.

And that January day in 2015, 17-year-old Miché was mobbed by other students excitedly telling her about the new girl, Cassidy Nurse, who was three years younger but looked almost identical to her.

Initially, Miché didn’t think much of it.

But when the two girls later met in the corridor, Miché says she felt an instant connection she couldn’t explain.

“I almost felt like I knew her,” she says. “It was so scary – I couldn’t understand why I was feeling like this.”

Despite the age difference, Miché and Cassidy began spending a lot of time together. 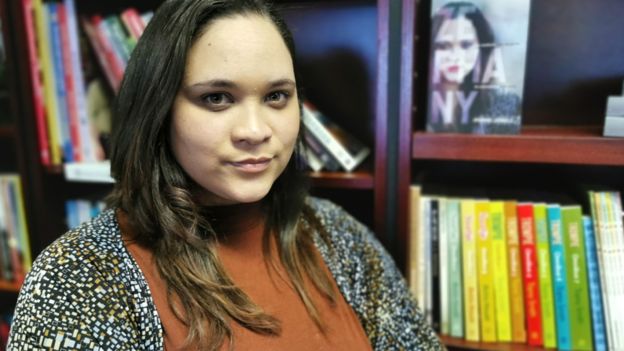 When anyone asked Miché and Cassidy if they were sisters they would joke, “We don’t know – maybe in another life!”

Then one day the two girls took a selfie together and showed it to their friends. Some asked Miché if she was sure she hadn’t been adopted. “No! Don’t be crazy!” she insisted.

Then Miché and Cassidy went home and showed their families the picture, too. Lavona, Miché’s mother, who called her daughter “Princess” and would take her to the mall and to the movies, commented on how similar the two girls looked.

Michael, Miché’s father, said that he recognised his daughter’s new friend – Cassidy’s father had an electrical store where he sometimes shopped.

But Cassidy’s parents, Celeste and Morne Nurse, gazed intensely at the photograph. They told Cassidy they had a question for Miché, and when the two girls next met Cassidy came out with it: “Were you born on 30 April 1997?”

“I said, ‘Why? Are you stalking me on Facebook?'” Miché says.

Cassidy assured Miché that she wasn’t stalking her, she just wanted to know when Miché had been born. So Miché replied that yes, she had been born on 30 April 1997.

Weeks later, Miché was unexpectedly summoned from her maths lesson to the headmaster’s office, where two social workers were waiting. They told Miché a story about a three-day-old baby girl called Zephany Nurse, who had been abducted from Groote Schuur Hospital in Cape Town 17 years previously and had never been found.

Miché listened to the story unfold, feeling unsure why they were telling her this. Then the social workers explained that there was evidence to suggest that Miché could be the child who had been taken, all those years ago.

To set matters straight, Miché explained that she hadn’t been born at the Groote Schuur Hospital – she had been born at the Retreat Hospital, about 20 minutes’ drive away. That’s what was on her birth certificate, she said. But the social workers replied that there was no record of her being born there. 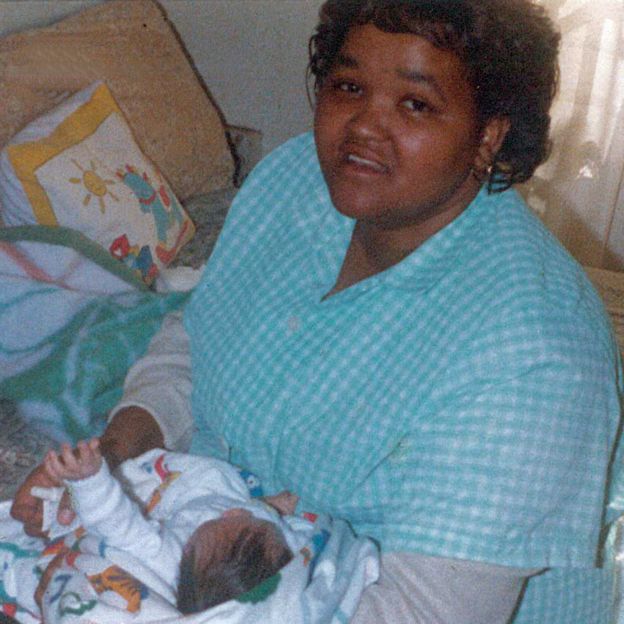 Photo of Lavona Solomon pictured at home with the newborn Miché

Still feeling that this must all be some terrible mistake, Miché agreed to a DNA test.

“I had so much belief in the mother who raised me – she would never lie to me, especially about who I am and where I come from,” Miché says. “So my mind was made up that the DNA test was going to be negative.”

But things did not go as she hoped. The test results came back the following day and proved indisputably that Miché Solomon and Zephany Nurse, the baby snatched from the Groote Schuur Hospital in 1997, were the same person.

“I sat there in shock,” Miché says. “My life was out of control.”

The story of the stolen baby, now a young woman on the brink of adulthood, being found quite by chance almost two decades later made headlines in South Africa and around the world and Miché’s life changed immediately.

She was told that she would be unable to return home – it would be another three months before she would turn 18 and be allowed to make her own decisions. For now she had to stay in a safe house.

Then Miché received more devastating news. Lavona Solomon, the woman she had grown up believing was her mother, had been arrested.

“That broke me,” Miché recalls. “I needed her. I needed to ask her, ‘Why? What’s going on?’ I was so overwhelmed that I belonged to someone else.” 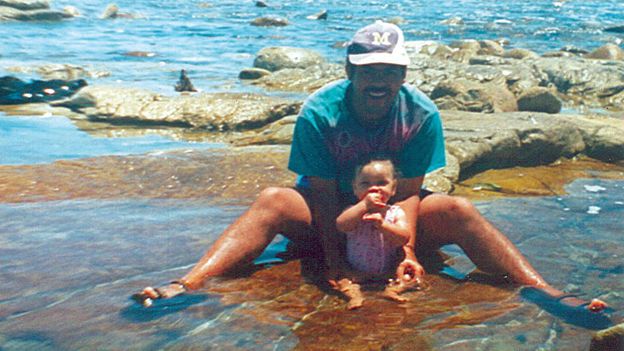 Photo of Eight-month-old Miché with Michael

Miché was present when Lavona’s husband, Michael – the man Miché regarded as her father – was questioned by police.

The police wanted to know whether he was part of the kidnapping plot.

“My father is soft and he’s gentle,” Miché says. “But he’s my rock, he’s my hero, he’s my daddy, he’s the man. And here’s this other man making him look like such a small child, while my father’s saying, ‘No, I didn’t do this. Miché is my daughter – how can she not be my daughter? I wasn’t part of this.'”

The police never found evidence that Michael Solomon had known that Miché had been taken from her biological parents without permission and he was released.

Michael says that Lavona had been pregnant. It’s thought that she concealed a miscarriage and then faked the remainder of her pregnancy, before stealing Zephany Nurse, bringing her home and pretending she had given birth to the baby herself.

And now Lavona Solomon was in custody, awaiting trial on charges of kidnapping and fraudulently claiming to be the mother of a child. 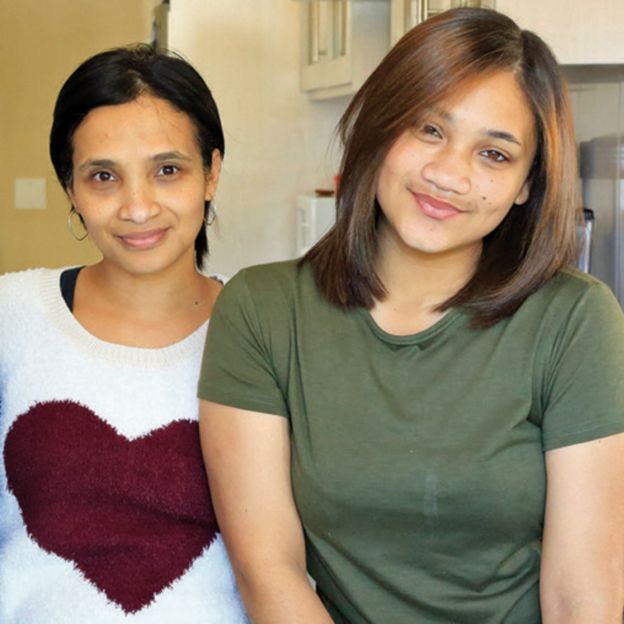 Photo of Celeste Nurse (left) and her second-born child, Cassidy

Although Celeste and Morne Nurse had gone on to have three more children, they’d never stopped looking for their firstborn, Zephany, and had celebrated her birthday every year – even after they had divorced.

But all the while their stolen child had been growing up nearby. The Solomon home is just 5km from the Nurses’ – as a small child, Miché would run around on the field opposite the Nurses’ house, while Michael played soccer.

Now, after an extraordinary turn of events, the Nurse family’s prayers had been answered. Miché was reunited with her biological parents at a police station with social workers on hand.

“They hugged me and squeezed me and started crying,” Miché says. But she wasn’t comfortable. Something didn’t feel right.

“I was like, ‘Just go with it because it’s a shame for these people, they have been through a lot,'” she says. “It’s sad, but you know, I felt nothing, I didn’t feel that I’d missed them.”

Miché was in emotional turmoil. One set of parents were elated and desperate to make up for lost time, but strangers to her. The others – the ones she loved – were devastated, and one of them was behind bars. 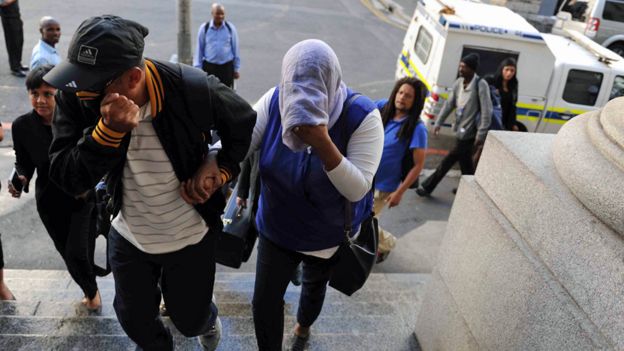 Lavona Solomon’s trial at the high court in Cape Town began in August 2015. Both Miché and her biological parents were there to hear Lavona’s testimony.

Throughout the trial, Lavona Solomon denied any wrongdoing. She told the court of her numerous attempts to conceive‚ a number of miscarriages and her desperation to adopt a child. Lavona then said she had been offered a baby by a woman called Sylvia who had been giving her fertility treatment. Sylvia had told Lavona that the baby belonged to a young girl who was not interested in keeping it and wanted the baby to be adopted. But there was no evidence that Sylvia existed.

Furthermore, almost two decades after the incident, a witness who remembered seeing the woman dressed as a nurse who carried baby Zephany away as Celeste lay sleeping, picked Lavona Solomon out in an identity parade. The judge concluded that the evidence against her was overwhelming.

In 2016, Lavona Solomon was sentenced to 10 years in jail for kidnapping, fraud and violating the Children’s Act. The judge criticised her for showing no remorse during the trial.

“I felt like death was happening to me,” Miché says. “I was like, ‘How am I gonna cope? How am I going to get through life without the mother that I had every day in my life?'”

Later that year, Miché visited Lavona in prison and was able to speak to her for the first time since the social workers had arrived at her school.

“The first visit was behind a window, it was not a contact visit,” Miché says. “And I saw my mother in the clothing that female prisoners wear and it broke my heart. I cried and cried.”

Miché really wanted to know the truth, to find out what had happened on the day that Lavona had taken her from her mother in hospital. 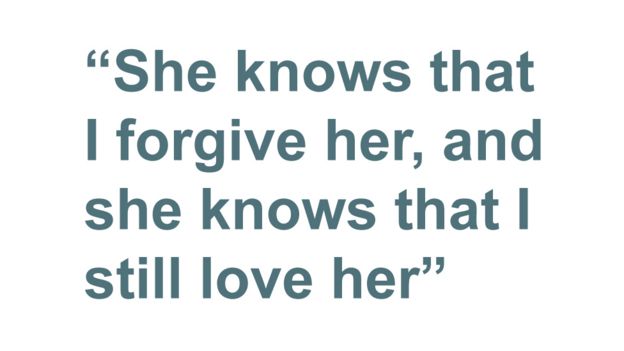 “I told her, ‘By knowing I’m not your blood – that I actually belong to someone else, and that you’ve robbed them of possibilities and changed my whole destiny – hurts me. How am I supposed to believe your word when you’ve lied to me, saying that I am your child? You broke your trust with me. You are going to have to come clean if you want to have a relationship with me.’

“She still says that she didn’t do it, but I think she did.”

However, Miché says she doesn’t hold any grudges.

“Forgiving brings so much healing into your heart,” Miché says. “Life must go on. She knows that I forgive her, and she knows that I still love her.”

It has now been more than four years since Miché discovered the truth about her identity. When she turned 18 at the end of April 2015, she considered moving in with one of her biological parents, but decided against it.

“They were divorced, that family unit had been messed up,” Miché says. “So I went for the obvious decision and the stablest decision – to move back in with Michael, that was my safe space, that was my home.”

Miché has struggled to form a relationship with her biological family, and says that at times she even felt that she hated them for taking her “mother” away. 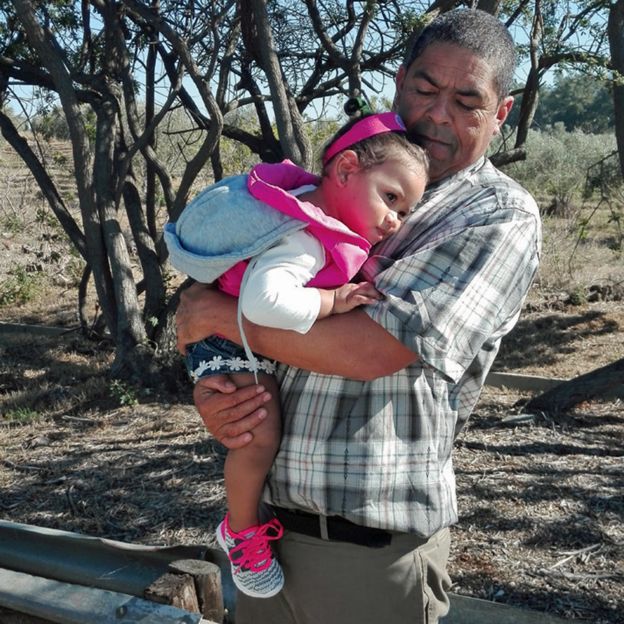 She still visits Lavona in prison in Worcester, about 120km from where she lives, but it’s a long drive, especially now that she has two children of her own.

Lavona Solomon is due for release in six years and Miché says she often wishes time would “hurry up”. She’s still living in the family home and waiting for her mother to return.

Perhaps surprisingly, Miché Solomon has chosen to keep the name that she was raised with rather than the one with which she was born. But somehow, despite the psychological catastrophe of discovering that the woman who raised her had actually stolen her, she has somehow made peace with both of her identities.

“I think I hated Zephany in the beginning,” Miché says.

“She came with such force, such an uninvited invitation, so much suffering, and so much pain. But Zephany is the truth and Miché, the 17-year-old girl that I was, she was a lie. So I’ve managed to balance both names. You can call me Zephany or Miché, it’s fine.”