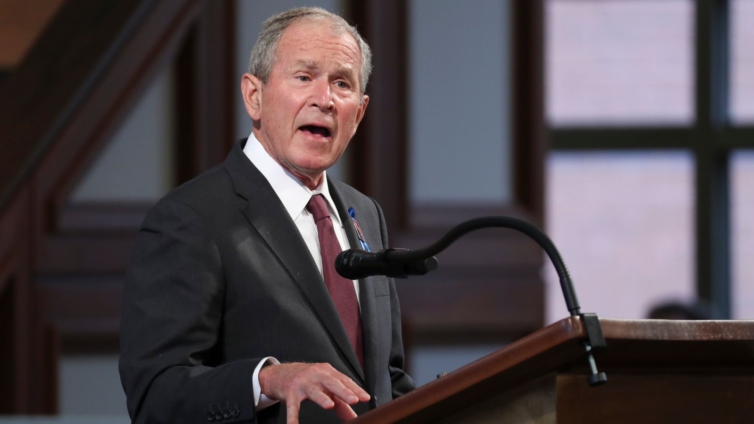 Donald Trump has returned to the golf course as pressure mounts on the president to accept defeat in the election.

Mr Trump was seen leaving the White House on Sunday to head out for a round at his course in Sterling, Virginia, having reiterated his unsubstantiated claims of voter fraud in a series of posts on Twitter.

He also lashed out at TV news networks, writing: “Since when does the Lamestream Media call who our next president will be? We have all learned a lot in the last two weeks!”

About 200 of Mr Trump’s supporters gathered outside the golf club.

One of them told Sky News it would be an “injustice to the country” if the president’s allegations about the election were not investigated.

But George W Bush, the last Republican in office before Mr Trump, added to the growing pressure for him to concede to Joe Biden.

In a statement offering his “warm congratulations” to Mr Biden and Kamala Harris, Mr Bush said the incoming Democratic president had “won his opportunity to lead and unify our country”.

Mr Bush also congratulated Donald Trump on a “hard-fought” campaign and said: “President Trump has the right to request recounts and pursue legal challenges, and any unresolved issues will be properly adjudicated.”

But he added: “The American people can have confidence that this election was fundamentally fair, its integrity will be upheld, and its outcome is clear.”

Since when does the Lamestream Media call who our next president will be? We have all learned a lot in the last two weeks!

Earlier, the defiant Mr Trump posted a sequence of tweets that appeared to quote law professor and former House Speaker Newt Gingrich, writing that “the tabulation stage” is “just beginning”.

He also alleged “a number of affidavits that there has been voter fraud”.

Mr Trump has repeatedly made the claims over recent days but has yet to give any proof of such fraud.

In a series of tweets, he apparently quoted Mr Gingrich – an expert in public interest law who served as Republican speaker from 1995 to 1999 – as saying: “If there’s a problem in the system about authentication, that would seriously affect the ENTIRE ELECTION.”

“We should look at the votes. We’re just beginning the tabulation stage. We should look at these allegations. We’re seeing a number of affidavits that there has been voter fraud. We have a history in this country of election problems. In Pennsylvania you had an order by a…

He also alleged Mr Gingrich said: “We believe these people are thieves. The big city machines are corrupt. This was a stolen election. Best pollster in Britain wrote this morning that this clearly was a stolen election, that it’s impossible to imagine that Biden outran Obama in some of these states.”

It is a US convention that once a presidential candidate secures 270 or more electoral college votes and wins the keys to the White House, as Joe Biden has done, the losing candidate makes a concession speech and congratulates their opponent.

Mr Trump is showing no signs of admitting defeat and there are reports, not confirmed by Sky News, that his son-in-law Jared Kushner and his wife, first lady Melania Trump, have advised him to quit.

However, others in his circle are supporting his stance, including his personal lawyer Rudy Giuliani.

The former New York mayor has vowed to provide Mr Trump with evidence of voter fraud but has yet to produce any – including during a press conference he held on Saturday in the car park of a small Philadelphia landscaping company.

Mr Trump’s sons, Donald Jr and Eric, have also encouraged him to keep fighting and challenged Republicans to stand with them.

In a statement on Friday, Mr Trump suggested that he would challenge the election’s result via the law, saying: “We will pursue this process through every aspect of the law to guarantee that the American people have confidence in our government.

“I will never give up fighting for you and our nation.”

Mr Trump’s team has launched legal action in a number of states in recent days.

In Nevada, his team asked for emergency relief to stop the counting of “improper votes” in Democrat-leaning Clark County, home to Las Vegas, and said it was filing a federal lawsuit.

DISCLAIMER: The Views, Comments, Opinions, Contributions and Statements made by Readers and Contributors on this platform do not necessarily represent the views or policy of Multimedia Group Limited.
Tags:
Bush
Election
Trump
Virginia
White House