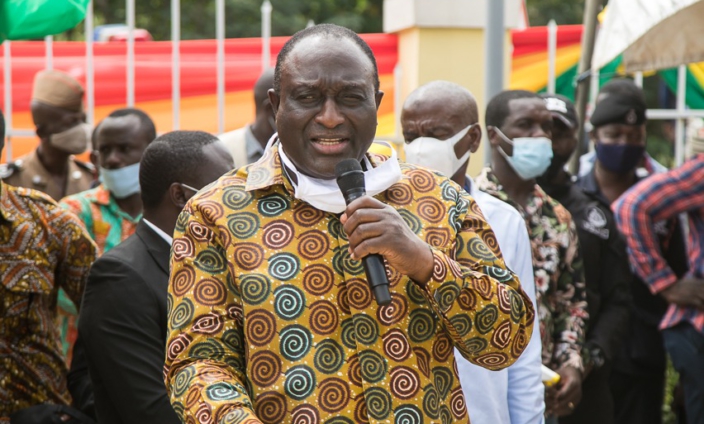 Government’s commitment to transforming the small and medium scale enterprises to boost the nation’s economic sector is on course the Trade Minister has stated.

This, together with the One District-One Factory aimed at increasing job and employment opportunities for the youth to improve livelihoods and strengthen the economic sector.

Mr Kyeremateng said this when he accompanied President Nana Akufo-Addo on Saturday, to commission a Business Resources Centre at Bechem in the Tano South Municipality of the Ahafo Region.

The Trade and Industry Minister explained that 67 of the business resources centres were being constructed nationwide with 37 already completed and commissioned.

According to him, the others would be completed by October 2020.

He noted that, the centres would not only serve as support and guide giving points for small and medium scale enterprises but also create job avenues for Ghanaians.

It is a Rural Enterprise Program to ensure quality and enhanced products and services at the local level, he added.

President Akufo-Addo, as part of his two-day working visit to the Ahafo region, inspected the construction of an Astroturf at Koforidua near Duayaw Nkwanta, the 3.9 kilometers Techire town roads under construction, and an 8.7 kilometres Techire to Adrobaa feeder roads in the Tano North Municipality.

President Akufo-Addo encouraged Alex Boahene, the Chief Executive Officer of Messrs Alexiboam Company Limited to speed up and ensure quality work was done on time to improve economic activities as well as pedestrian and vehicular movement.

Touching on agriculture at a durbar organized for the President and his entourage during a courtesy call on Nana Boakye Tromo II, the Paramount Chief of Duayaw Nkwanta, Mr Afriyie Akoto, the Minister for Agriculture entreated farmers to form groups and units at their respective communities.

He said the government was setting up a Farmers’ Council which would contribute to the improvement and sustainability of the Planting for Food and Jobs and the Planting for Export and Rural development programmes.

This, Mr. Akoto noted would not only enhance and ease the distribution of farming relief supports like fertilizers and improved seedlings to farmers but also help get the contributions and ideas of farmers in general agricultural decision making to help improve the agricultural sector.

Hence, the government has recruited and trained 2,700 Agric Extension Agents to educates farmers on modernised farming practices to make agricultural a lucrative business.

DISCLAIMER: The Views, Comments, Opinions, Contributions and Statements made by Readers and Contributors on this platform do not necessarily represent the views or policy of Multimedia Group Limited.
Tags:
Alan Kyerematen
SMEs