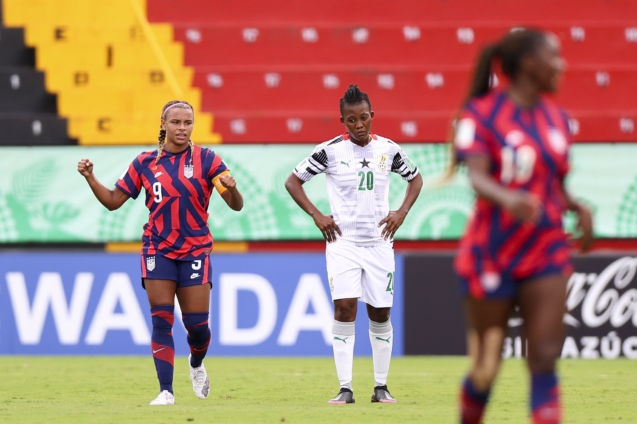 The Black Princesses’ hopes of starting the 2022 U-20 Women’s World Cup hit a snag after suffering a 3-0 drubbing against USA in their opening game.

Michelle Cooper opened the scoring for the USA after just 11 minutes, heading into the net from close range after Elaine Rouse’s well-timed cross.

20 minutes after, the Princesses were handed another misery as Jacqueline Owusu was shown a red card for a reckless challenge on the opposition’s player.

Ben Fokuo’s team were far from their best in the opening half of the game as they failed to keep up with the tempo of the Americans.

Alyssa Thompson was on hand to double the lead for USA seven minutes away from the break, as she connected well with a low cross from the left wing.

Back from recess, Ghana were hopeful of reducing the deficit. Fokuo subbed off Sharon Sampson with Mukarama Abdulai taking her place.

Six minutes into the second half, Alysson Sentnor made scored the third goal of the game to put the game beyond the reach of Ghana.

But for the Video Assistant Referee (VAR), Cecelia Nyama would have also been sent off.

Despite creating loads of chances in the last quarter of the game, USA were unable to add to their goals as the game ended 3-0.

Thursday’s outcome also means Ghana have lost three out of the four matches they have played against the Americans at the U-20 Women’s World Cup.

Ghana would need to pick good points against Japan and the Netherlands in the other group games to stand a chance of making it past the group stages for the first time.