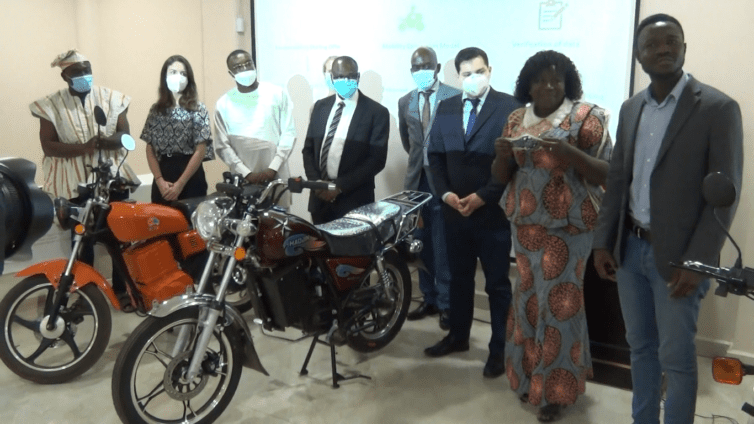 The University of Energy and Natural Resources (UENR), in partnership with the Bochum University of Applied Science, have partnered Solar Taxi to outdoor E-motorbikes at a ceremony in Sunyani in the Bono Region.

The bikes are fitted with battery packs and meters that indicate the battery usage, among other features, and will be charged at designated charging stations at the University.

The “E-micromobility in Ghana (EmmGh) project, funded by the German government, is aimed at reducing climate change and carbon emissions into the environment with a more sustainable energy-friendly mode of transportation.

The outdooring of the E-Motorbikes follows a Memorandum of Understanding signed between the partners, including DON BOSCO, during a kickoff workshop in April 2021.

Ing. Dr. Eric Antwi Ofosu, a senior lecturer at UENR and the Regional Director of Center for Energy and Environmental Sustainability, said the project would also help build their capacity to convert existing fossil fuel motorbikes into Electric Motorbikes.

This alternative, he said, also creates opportunities for local job creation and economic value to the local supply chain.

He explained that the three motorbikes presented were assembled in Ghana by Solar Taxi.

He further explained that the bikes, one of them transferred from fossil fuel to electric energy, and two other originally designed E-scooters, are to be test run and used at the UENR campus to further research into its functionality.

Dr. Antwi Ofosu noted that it will also serve as an opportunity to know how much they are contributing and their efficiency on climate change and system of use.

“The E-micromobility in Ghana project is going to set up a maker house or assembly plant on UENR campus, with a space of about 3,500 square meters, where fossil fuel motorbikes would be converted into electric bikes. It would be used to train our students and the youth in Ghana to be able to do the conversion”.

He averred that with the ever-increasing fuel prices, they anticipate many people in Ghana would be interested in the E-mobility, and as such, they would also look at the economic side by adding value to it.

“The Ministry of Agriculture is buying a lot of motorbikes for the extension officers, and we see economic opportunities there”.

For every kilometer traveled with fossil-powered transport, Arnold Anokye Amoateng, Northern Sector Operations Manager of Solar Taxi said, the environment is polluted by 96-98 grams of carbon, while electric vehicles are less than 5 grams, hence making it environmentally friendly.

He, however, admits that though electric bikes have a high initial cost, the operationalization cost is much less compared to fossil fuel bikes.

He said they have the technology and the know-how to maintain the E-Motorbikes when necessary and plans to convert about 100 fuel bikes by the end of the year.

A researcher with the Bochum University of Applied Science, Fred Agyei, hopes they would be able to create a commercial version of the E-bikes in Ghana as an alternative to traditional mobility.

“In the future, we want to move beyond research and go into commercial operation or see businesses that are active in the sector in E-mobility, not just E-motorbikes, E-vehicles, we want to kick start that conversation to have that kind of vibrant economy”, he stated.

The Pro vice-chancellor of UENR, Prof Adebayor Adekoya, further noted the maker space would make the university an E-mobility hub and a go-to for E-mobility solutions.

He assured that UENR would continue to contribute to the success of the project and become the pacesetter and an answer to the E-mobility industry in Ghana since the project has come to stay.