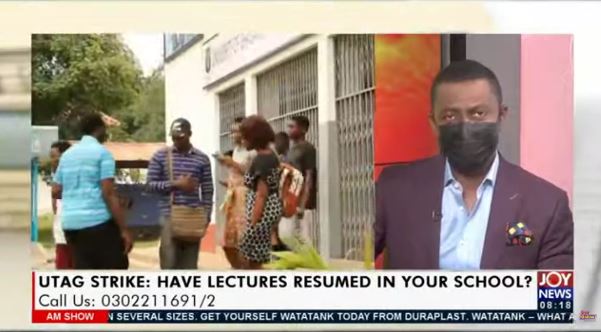 Some University students in the country have expressed worry over what they described as poor communication from Managements of the Universities on resumption of academic activities following UTAG’s decision to call off its strike.

Although the Universities Teachers Association of Ghana (UTAG) on Friday, indicated a possibility of a resumption of academic activities on Monday, the students have doubts because they say authorities have not officially communicated the new development to them.

“I think University managements are not forthcoming with information and this has put most of the students in a dilemma,” a student of Akenten Appiah-Menka University noted.

A student of the Kwame Nkrumah University of Science and Technology (KNUST) added, “We have been waiting for management to release a communique to us since Friday but we did not receive anything, we are stranded here, we don’t know what to do.”

According to the students, they were supposed to write their end of semester examinations on August 2, the day on which UTAG went on strike, and expected to vacate on August 13, Therefore, they had not made any arrangements to continue being on campus after this date.

“Our landlords and landladies collected their keys from us, now the school Management is telling us to come back and write exams, where are we going to sleep, even the houses have been given out,” a student said.

Speaking on JoyNews’ AM Show on Monday, the final year students indicated that about half of the student population are home. Hence, coming back to campus will only attract an unplanned cost.

The situation, they say is disturbing since they were renting outside the campus and “some of us had to struggle and work even before getting food to eat.”

The students are, therefore, pleading with school authorities to consider online examinations for the final year students.

“So, we are only begging Management that if it will be possible, they should allow us to write the whole thing online because we can’t suffer at the consequences of what UTAG has done.”

They explained that the online session will afford “those who have been sacked from their houses (rented) to have the benefit of writing from their homes.”

Meanwhile, there are also indications that other universities resumed lectures over the weekend.

UTAG embarked on strike to demand improved conditions of service. The lecturers wanted the government to implement a 2012 single spine salary agreement that pegged the salary of entry-level lecturers at $2,084.

But the Association suspended the action for a mandatory one month period to continue negotiations with the government.

DISCLAIMER: The Views, Comments, Opinions, Contributions and Statements made by Readers and Contributors on this platform do not necessarily represent the views or policy of Multimedia Group Limited.
Tags:
online exams
University Students
UTAG Strike