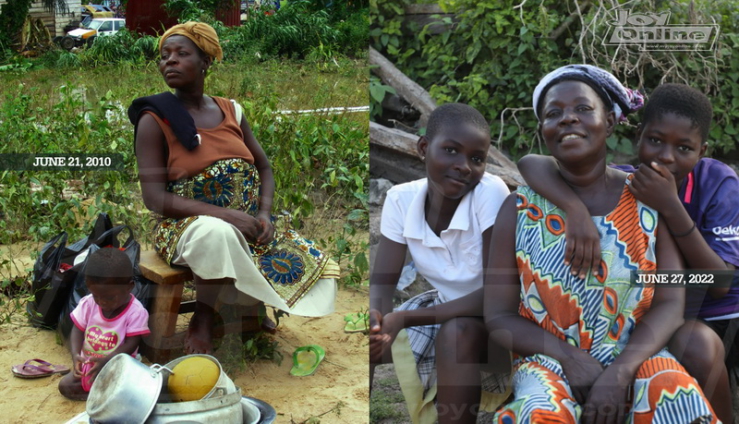 June 20, 2010, can be described as a bad day in the life of 56 year old Madam Efua Bronya and other residents of Agona Swedru in the Central Region.

It is a day of painful memories that many residents of the town will not forget in a hurry. This is because of a flood disaster which hit the town and led to a massive destruction and loss of lives.

One of the residents, Efua was living at Nkubem, a suburb of Swedru which situated close to the banks of  Akora river.

The Akora river streams right in the middle of the town; serving as an alternative source of water and an enhances aesthetic echo tourism site in the town.

But on that fateful Sunday, Madam Efua Bronya who was 9 months’ pregnant had just returned from a church service. Upon her return, she saw an unusual rising of the water level of the river but was not immediately alarmed.

However, a few hours later she was informed that some communities close to the river upstream were fast flooding.

Little did Efua know that their usually ‘friendly’ river was going to be hostile and render them homeless.

Before sunset, most of the houses along the banks had been flooded. Some of them collapsed, including that of Efua’s fellow residents.

At that point, homelessness became imminent. As a result, she started packing her belongings after a collapsed wall made water rush into her house.

She the hanged around helplessly with her one year old grand daughter till the next day.

During this time, Efua was in the last days of her pregnancy. The situation compelled her to sleep in the open till the next day when officials of the National Disaster Management Organization (NADMO) supplied mattresses and took them to a near by church for temporary accommodation.

He met Efua who shared her experience with him for the first time, after the threatening incident.

In her narration, she recounted that life became unbearable in the church since the weather was not favorable for her condition.

Eventually, Efua said she began feeling the pangs of child birth. An ambulance was then brought to take her to the Swedru Government Hospital where she delivered a bouncing baby girl, Afia Yeboah Ofosu, who  is now 12 years old.

Her grand daughter, Mirabel Dadzie, who was sitting in front of her at the time of the flooding incident 12 years ago is now 13 years.

Though Efua survived the disaster, she says any time her daughter and grand daughter are around, it reminds her of those life-threatening days .