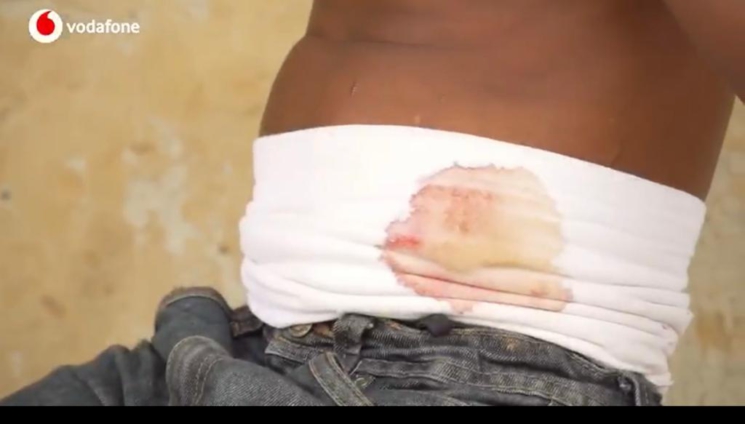 Vodafone Ghana through its famed Healthline TV show has successfully completed a life-saving surgical operation for a seven-year-old who was suffering from difficulty in passing stools.

In a particularly touching episode of the TV show, Sadat Gadafi’s parents who are residents of Wasa Amenfi, in the Western Region, were grateful their son can ow pass stool.

His mother told the Vodafone Healthline team, “We noticed that our son had an unusual bowel movement when he was born; this got me really worried. After two months, I was advised to send him to the Bawku Hospital where he was admitted for a week.

“The feedback from the doctor suggested that a surgery was the only way to rectify the anomaly, but my husband and I had no money for the surgery” his mother narrated.

Mr Mamudu, Sadat’s father also added that after seven long-years of managing his son’s bleak and ever-worsening condition, they were very elated when Vodafone Ghana decided to help their son.

“We took him to the Komfo Anokye Teaching Hospital several years later for a second review, but we were once again informed he needed surgery, which we couldn’t afford.

“So, when I received a call out of the blue, announcing that Vodafone had offered to finance my son’s surgery as well as all other medical requirements for restoring my son’s health, I was overjoyed. It was like a miracle to me,” he stated.

“My son’s condition had deteriorated to a point where he required emergency medical attention; we feared for the worst but just when it seemed all hope was lost, Vodafone Ghana came to our aid.

“Now, my son can have a normal life. I can never thank Vodafone Ghana enough, for saving my son’s life”, he concluded.

The programme lends credence to Vodafone’s status as a purpose-led brand that truly cares about the health and well-being of the people and communities it serves and is fully committed to championing sustainable initiatives that drive social change and improve lives.

Vodafone has also established an allied Healthline Call Centre to provide Ghanaians with credible information on COVID-19 and other health issues.

The general public can also reach out to the call centre for support and surgical assistance for needy individuals with troubling medical conditions.

The Healthline call centre can be reached toll-free via 255 for Vodafone Customers and 050 9999255 on other networks.

DISCLAIMER: The Views, Comments, Opinions, Contributions and Statements made by Readers and Contributors on this platform do not necessarily represent the views or policy of Multimedia Group Limited.
Tags:
KATH
Vodafone Healthline
Wasa Amenfi