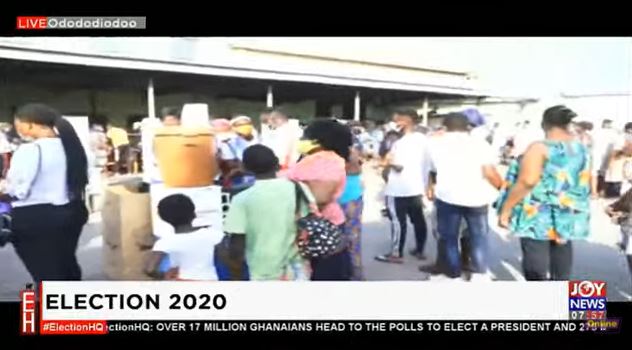 The City Engineers polling station at the Odododiodo Constituency in Greater Accra was thrown into a state of disarray on Monday as some voters reportedly forced themselves into the premises.

The voters, who had formed a long queue outside the main centre, claimed that the Electoral Commission (EC) officials and the security personnel were compromising the voting process by allowing persons who had not joined the queue into the premises.

One of the voters said, “We came here at dawn to form the queue, but after hours of staying here, the officers will just come and allow some persons in.

“The police officers are not doing anything about it; they are just here looking on without taking any action. They are not giving us the opportunity to get in that is why we had to force our way in.”

Both the EC officials and the security officers were unable to calm the agitated crowd who had been in a queue since the early hours of Monday, December 7.

After barging into the station, however, a number of voters engaged in brawls with electoral officers until police were called in.

A Police reinforcement team from the Jamestown Divisional Police Centre was deployed to the station to manage the situation.

Odododiodio Constituency is a notable hotspot during elections in the Greater Accra Region.

Youth from both the incumbent New Patriotic Party (NPP) and the opposition National Democratic Congress (NDC) in the constituency had earlier engaged in a violent clash that left 15 persons wounded in October 2020.

Jamestown District Police Commander, DSP Alexander Tieku, has promised that measures are in place to ensure an incident-free poll.

“When we came in we saw a chaotic situation. Some people were not observing social distancing so that is what we wanted to ensure that is done.

That is why we are asking them to go back so that there will be some space. That is why we called for reinforcement to assist us. We have brought a lot of personnel here to assist us so, by and large, we are trying to maintain law and order”.

DISCLAIMER: The Views, Comments, Opinions, Contributions and Statements made by Readers and Contributors on this platform do not necessarily represent the views or policy of Multimedia Group Limited.
Tags:
Election 2020
Electoral violence
Odododiodo Constituency