We knew we had won the league after beating Hearts of Oak - Imoro Ibrahim - MyJoyOnline.com 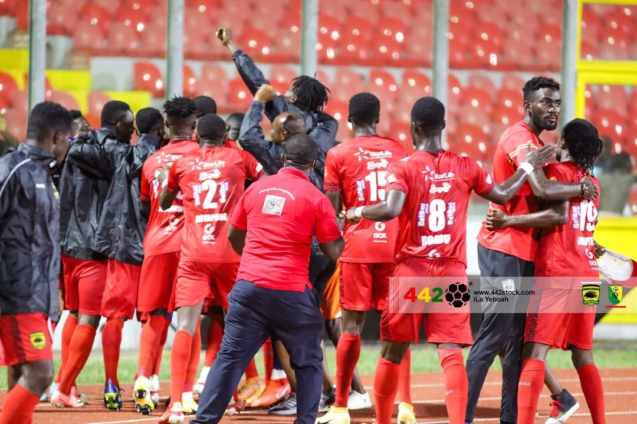 Asante Kotoko was confident the Ghana Premier League title was theirs to lose following their victory over Hearts of Oak in Kumasi, according to Imoro Ibrahim.

The Porcupine Warriors beat the Rainbow lads with a 1-0 scoreline courtesy of a first-half spot-kick from Franck Mbella Etouga to give Kotoko all three points.

Since that game, Prosper Narteh Ogum’s side has played eight games in the Ghana Premier League, winning three, losing three and drawing two.

The defining moments came when Kotoko picked up a draw against AshantiGold at the Len Clay Stadium in their outstanding fixture.

However, Imoro has revealed they knew the league title was theirs after beating their arch-rivals.

“We knew we had won the league after beating Hearts of Oak because we knew no team could challenge us,” the left-back told Angel FM.

Going into the 2021/22 season, the Porcupine Warriors brought in new players including Etouga, Georges Mfegue, Isaac Oppong, Maxwell Agyemang, Richard Boadu and a host of others, who have in one way or the other contributed to the club winning its 25th league title.

Imoro believes the addition of the new players added a spark to the team that finished second during the 2020/21 season.

“The new players are very good and they put in a lot of hard work,” the youngster added.

The Kumasi-based side is set to be crowned champions of the top flight on Sunday, June 12 at the Baba Yara Stadium.