We must control the indiscriminate use of explosives in war - Bawumia to UN Security Council - MyJoyOnline.com 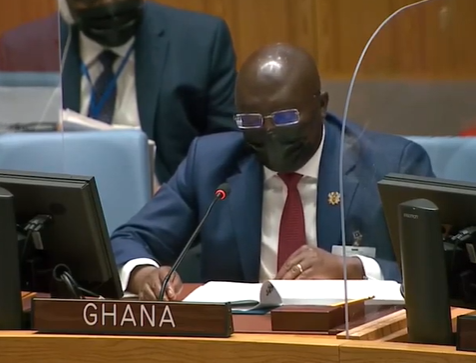 Vice-President, Dr Mahamudu Bawumia has admonished the UN Security Council to carefully consider its existing framework for the management of urban wars.

Speaking at the 8953rd UN Security Council Meeting in New York on Wednesday, Dr Bawumia noted that the indiscriminate use of explosives during wars in urban areas must be checked.

According to him, civilians bear the brunt of such actions as lives are lost, social amenities and source of livelihoods are destroyed.

“Advancements in science and technology have led to the development of compact and more sophisticated weapon systems that are able to deliver greater damage to targets and their surroundings.

“I urge that we act to control the nature and indiscriminate use of explosives in war, combined with the management of the high civilian population density of urban areas to reduce the adverse impact that often leads to the loss of lives, crucial infrastructures such as schools and hospitals and sources of livelihood such as business centres in these areas,” he said.

On behalf of President Akufo-Addo, the Vice-President participated in the United Nations Security Council Open Debate on War in cities: Protection of Civilians in urban settings, held in New York.

He underscored the fact that the asymmetrical nature of prevailing wars in cities, and the consequent embedding of combatants within interconnected resources and infrastructure of urban areas, poses immense challenges to the protection of civilian populations.

“Mr President, we must recognize that in developing norms and standards to protect the civilian population during conflict, there is a strong need for local engagement in order to assure the acceptance of such norms.

“Local communities need to be empowered in order to take required preventative actions and also not to shield perpetrators of crimes against civilian population,” he added.

To stop the prevailing trend, Dr Bawumia noted that the world must be decisive in preventing domestic inequalities that lead to urban migration and the creation of fertile grounds for conflict.

They discussed the security situation in West Africa, the impact of the COVID-19 pandemic and agreed on the need to place much premium on Covid-19 vaccine supply, vaccine manufacturing capabilities, how to adapt and prepare for a next wave or pandemic.