'We promise to work with you' – Mahama tells Asantehene - MyJoyOnline.com

‘We promise to work with you’ – Mahama tells Asantehene 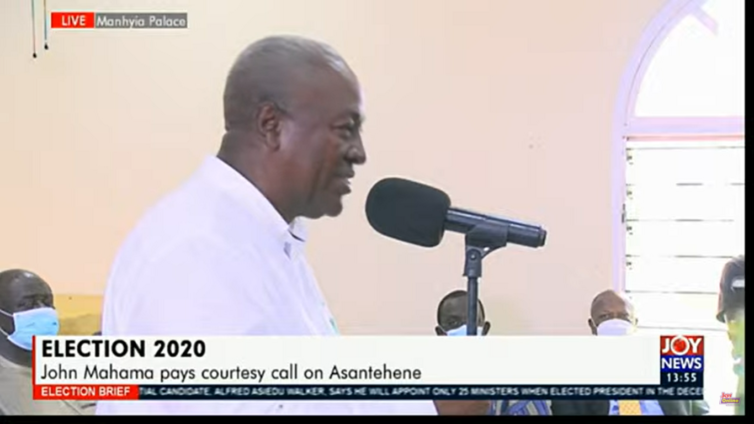 The Presidential Candidate of the opposition National Democratic Congress (NDC) has pledged to work closely with Otumfuo Osei Tutu II should his party win the 2020 elections.

John Mahama in his speech during a courtesy call on the Asantehene on Wednesday said he has transformational plans for the Ashanti Region in his second term and would and therefore needs Otumfuo’s support to actualize them.

According to Mr Mahama, the NDC under its eight-year leadership undertook major developmental projects in the Ashanti Region alone including, the construction of roads, schools, health facilities and markets.

This, he said, will be repeated under the next NDC administration in 2021 if he assumes the role of President.

“We have so many initiatives for the Ashanti Region and we ask God to help us win. And now that we have your blessings, we know God will listen to our prayer and let us win the 2020 elections.

“And we promise to work with you when we win so that Asanteman gets what befits her,” he said.

He believes that most accidents that occur on the roads are due to wrongful overtaking by drivers on the single-carriage highway, and added that the road is not befitting of one that connects the two major cities.

He added: “We are thinking of making a by-pass for Kumasi so that trucks travelling to the Northern parts of Ghana or countries will use that road in order to reduce the traffic in the Kumasi Township.”

On his part, Otumfuo Osei Tutu II urged political parties to desist from using abusive words as they campaign.

He stressed that a peaceful election is the ultimate prize that Ghanaians deserve from all politicians.