We will soon have a National Forest Monitoring System to safeguard our forest lands – Abu Jinapor - MyJoyOnline.com 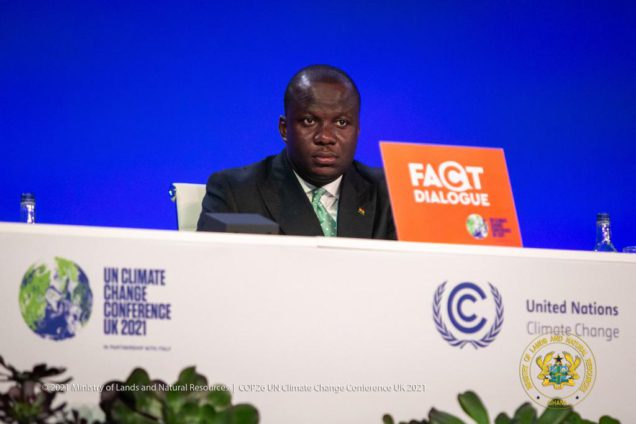 Delivering a speech at the COP26 summit in Glasgow, he said the developed monitoring system will also monitor other commodity transactions and extractions.

According to the Minister, the new monitoring system is necessary due to government’s plan to reduce and ultimately eliminate illegal logging.

“Building on this, a comprehensive National Forest Monitoring System is also being developed by the Ghana Forestry Commission, as a forest landscape safeguard tool, not just for timber or wood products, but to monitor other commodity extraction and transactions,” he said.

He added, “This system which will have both a human and remote sensing component will be linked to the Cocoa Management System being developed by the Ghana Cocoa Board to have a full database of farm locations and farmers.

“This will enable them to channel the needed support appropriately and also have the right numbers in making provision for farmer resource allocation such as the Living Income Differential.”

The minister further called on governments of countries committed to addressing climate challenges to pay attention to smallholder farmers and indigenous communities to combat climate.

Speaking to a group of journalists at the sidelines of the COP26 summit in Glasgow, the minister noted that smallholder farmers must be considered in the solution to address climate challenges.

“The strategy required to ensure that indigenous communities and their livelihoods are protected for and catered for is key, really and of all that we are doing in Glasgow and all the talks we’ve been engaged in and the big commitments and declarations we’ve been engaged in if the livelihoods of indigenous communities do not form part of the central strategy of what we are doing then I think it will be an exercise in futility,” he said.

Adding that “Let me conclude by stating and doing so forcefully that the strategy of adaptation and paying attention to smallholder farmers and indigenous communities, the centrality of it cannot be overlooked and we overlook it at our peril, and all these talks cannot go anywhere.”

According to the Minister, smallholder farmers must be supported as they contribute millions to the supply chain.

“This cannot continue, and they, smallholders, must be given the needed support through a transparent traceability system that provides Reward for Effort,” he noted.

Meanwhile, President Akufo-Addo has said that developing countries are disappointed by the failure of the wealthy nations to honour their commitment of providing $100 billion to assist in the fight against climate change.

Speaking at the COP26 summit, the president said, “We are naturally very disappointed by the failure of the wealthy nations to honour their commitments of making available $100 billion annually to the poorer countries to assist us in the fight against climate change and by the unavailability of the technology transfer that will help us find sustainable ways of charting a path out of this existential crisis.”