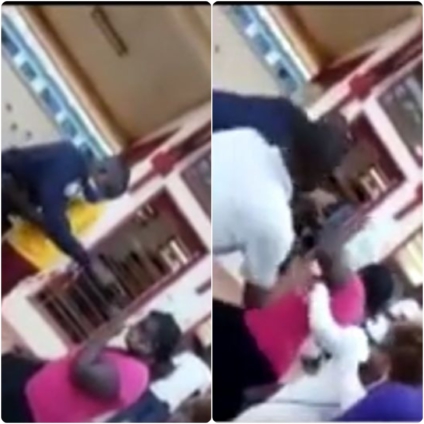 The Ghana Police Service has launched investigations into the circumstances which resulted in an officer slapping a woman at a voters’ registration centre.

In a viral video, a woman who was in a queue waiting her turn was seen exchanging words with the officer.

The enraged officer then came closer and while making his point slapped the woman. The two were separated by other registrants at the centre.

Following this, the Service has issued a statement saying the identified Officer captured in the act is Lance Corporal Wormenor Samuel.

The scuffle is said to have occurred on July 9, 2020, at Asofa M.A JHS centre in the Greater Accra Region

“The attention of the Police Administration has been drawn to a video circulating on social media in which a police officer is seen slapping a woman at a place believed to be a Voters Registration Centre.

“The Police Administration wishes to assure the public that it has commenced an investigation into the matter and will provide facts of the matter to the public in due time, all should be assured,” the statement said.

Lance Corporal Wormenor is currently under investigation for professional misconduct and assault against Joyce Ofosuwaa.

DISCLAIMER: The Views, Comments, Opinions, Contributions and Statements made by Readers and Contributors on this platform do not necessarily represent the views or policy of Multimedia Group Limited.
Tags:
Electoral violence
Ghana Police Service
Madam Joyce Ofosuwaa
Wormenor Samuel