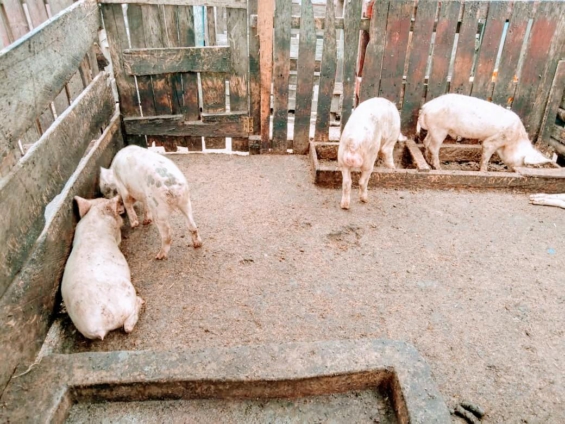 Pig Farmers at Saki, a community in the Kpone-Katamanso Municipality, Greater Accra Region, said they have lost over GH¢720,000 worth of investment due to the outbreak of the African Swine Fever (ASF), which ravaged their farms a few weeks ago.

Narrating the ordeal to the Ghana News Agency in Saki, John Amartey revealed that since the outbreak, he has lost over 100 pigs on his farm alone.

He noted that other farmers have also recorded higher mortalities, adding that the pigs are still dying due to the African swine fever which is still prevalent in the farms at Saki.

He explained that the situation has rendered most of the pig farmers hopeless as their only investment got destroyed by the swine fever.

According to the pig farmer, approximately 500 pigs had succumbed to the African Swine Fever including pregnant ones across the entire enclave, saying that the mortalities started in May this year, but they were oblivious that it is endemic and could cost them that much.

Another farmer attributed the rapid spread to the negligence of some farmers who allowed their pigs to move around in the town without any proper care, “these types of roaming pigs become super-spreaders”.

Mr Amartey told the GNA that the average cost of a full-grown pig is between GH¢1,800 and GH¢1,400 depending on the size and age.

According to him, some farmers do not keep their farms clean and will not heed any advice, “we must blame ourselves too”.

Kpone Katamanso Municipal Veterinary Officer, Dr Emmanuel Kwao Pecku, affirmed that the farmers had lost a huge sum of investments, saying the situation is really going to affect farmers who depended solely on the piggeries for a living.

Dr Pecku stated that plans had been advanced to excavate some portions around the farms to bury the faecal waste, carcases, and other contaminated materials on the farms for the place to be fumigated.

The Ghana News Agency observed during a tour of some of the farms that many of the pig farms have been deserted as no pigs were seen in some of the pens.

Farmers have also packed their tools from the farms, few farmers were, however, seen pondering over their losses.

Unbearable stench emanated from the piggeries signalling that the farmers threw some of their dead pigs into the bush whilst others burn the dead pigs, leaving the carcases for flies and other insects to feed on them.