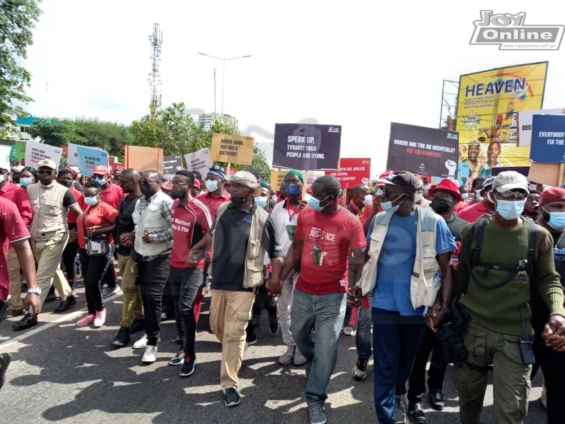 The Ningo Prampram MP, Samuel Nartey George, has questioned the rationale behind having the military at the National Democratic Congress’ (NDC) demonstration.

He said the military has “never been a tool for crowd control” as such the party expected to see the police and not the military.

“The military officers are not trained for crowd control so what is their business on the road,” he quizzed.

“As organisers, we have no consultation whatsoever with the military, we have had consultations with the police even as far as agreeing on what side of the roads to walk on, where to make the turns and everything, so why bring in the military,” he told JoyNews’ Daniel Dadzie.

According to the Ningo Prampram legislator, part of the reason for the ‘March for Justice’ demonstration is “the excesses of the military.”

Referring to the recent shooting of some protesting youth in Ejura in the Ashanti Region by soldiers, Sam George said, “we don’t want to provoke the people.”

The MP then alleged that there had been a meeting to direct the officials to the road for reasons he did not mention.

“To those who sat at the meeting last night and decided that they are going to put the military to meet us halfway, we’ve seen your decision,” he said.

Mr George stated that unless the Inspector General of Police (IGP) had requested support amid a protest, the military involvement will be of no need.

“Has the IGP said that he is incapable of handling the situation?” he questioned.

“Since when has the military been the ones responsible for security in a demonstration. The military is always a backup when the police themselves makes the request for the military,” he added.

DISCLAIMER: The Views, Comments, Opinions, Contributions and Statements made by Readers and Contributors on this platform do not necessarily represent the views or policy of Multimedia Group Limited.
Tags:
March for Justice protest
Military Presence at Protest
NDC Youth Wing
Sam George