Who is the other mystery ‘Aisha Huang’ involved in the Chinese Stadia Project for CAN 2008? 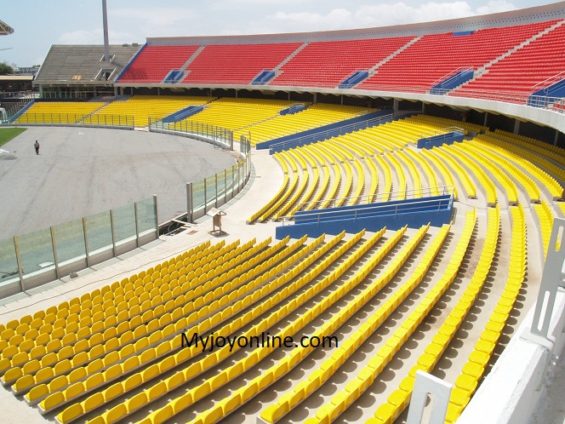 Accra Sports Stadium under renovation ahead of CAN 2008

The beginning of the Aisha Huang stories of involvement in the local Galamsey activities did not attract my usual attention till I became aware that a Chinese Lady by same or similar name had hitherto been sojourning in the country within the period of Ghana’s preparations towards the most successful hosting and organisation of the 26th MTN Africa Cup of Nations, Ghana 2008, involving the use of four (4) stadia at Accra, Kumasi, Tamale and Sekondi-Takoradi.

The choice of the Chinese followed an earlier visit by the former President John Agyekum Kufuor to the Republic of China, where he and his delegation were shown a 10,000 – 15,000 seater sports facility, which he was informed could be adopted as well as adjusted for the CAN 2008 Tournament at a unit cost, averaging ten to fifteen million US dollars (USD$10.0 – 15.0 million) each, subject to the specifications required.

On his return, President Kufuor directed that a Ghana Delegation led by the then Minister of Education and Sports, Hon. Yaw Osafo Maafo, MP (February 2005 – May 2006) and a Member of the Local Organizing Committee (LOC) for the CAN 2008, travel to China to conclude the deal for the construction of the two (2) 20,000-capacity stadia.

I was not privy to whatever happened in China and I would not pretend to know whatever happened there except that their return came with the name of the first ‘AISHA HUANG’, who was supposed to be married to a Ghanaian, taking the centre-stage in the design and construction of the two (2) stadia for Tamale and Essipon and like the ‘Aisha Huang of Today’, she was supposed to have wielded so much power in the scheme of things, including possessing alleged sex tapes laced with stories that filtered into Ghana several days after.

On the projects themselves, I had done my part in securing the site for both stadia: in Tamale I had hosted a stakeholders meeting at the Residency to have the buy-in of all stakeholders, including Chiefs and opposition Members of Parliament, whilst in Sekondi, with the support of Nana Kobina Nketsia V, Omanhen of Essikado Traditional Area, we were able to avoid any land litigations over the site and beat the timeline for delivery of the facility.

To facilitate the construction of the two (2) new Chinese 20,000-seater stadia, the Parliament of Ghana adopted and approved a Credit Facility Agreement between the Government of Ghana and Barclays Bank of Ghana Limited for the amount of fifty million United States Dollars (US$50,000,000.00) towards their constructions at Tamale and Essipon (Sekondi-Takoradi) as supplementary funds.

At a certain point, the then President was agitated because he thought the cost of the two (2) new stadia looked ‘funny’, considering the individual and joint capacities with regard to value-for-money of the project. The rumour mill had it then that the controversies of the times led to a Minister of State losing his portfolio in a reshuffle or was it a ‘SACK’?

For the record, the Shanghai Construction Company of China built both stadia and handed them over to the Government of Ghana and the CAN 2008 Local Organising Committee (LOC) in October 2007, barely four (4) months to the Opening of the Tournament in January 2008.

It was during the handing over of both sites to the Chinese company for them to commence the constructions in Tamale and Essipon that the name of that mysterious ‘Aisha Huang’ took a more indispensable centre stage, carrying with it all manner of controversies, such as some of what are being peddled around now in relation to the current Galamsey menace.

In the final analysis, that ‘Aisha Huang of CAN 2008’ became such an ‘Untouchable Lady’ like her current name sake.

The mystery for me is that if you situate some of the current stories like how indispensable the ‘Aisha Huang of Today’ was to securing the Chinese facility for projects in Ghana between space and time, especially how the other persona was much younger then to the ‘Galamsey Queen’, one is tempted to think they could be one and the same lady.

Maybe one of the mysteries of happenstances, in this matter, is how interesting it would be to find out if AISHA NUANG, the ‘Galamsey Queen’ of today could be related or otherwise be the same ‘Aisha Huang’ of CAN 2008 Chinese Stadia construction?

Too many things look too similar, including same party in government with some similar characters and personalities but such is fictional story-telling and as they say: “WHEN IT IS COMING, IT IS DOING”.

DISCLAIMER: The Views, Comments, Opinions, Contributions and Statements made by Readers and Contributors on this platform do not necessarily represent the views or policy of Multimedia Group Limited.
Tags:
Aisha Huang
CAN 2008
Galamsey