Why three South African firefighters died from lack of water

The death of three firemen in South Africa has shocked the country, with many feeling the blaze at a 26-floor government building in Johannesburg reveals a reckless attitude to health and safety by elected officials.

"If there was water in the building, our brothers would have survived and we would have been able to save the building," Muzikayise Zwane, a fireman from the Johannesburg Central Station, told mourners at an emotional memorial for his colleagues.

Mr Zwane was part of the first team to respond to the fire on 5 September in central Johannesburg.

It was meant to be a routine call-out, but something went terribly wrong. 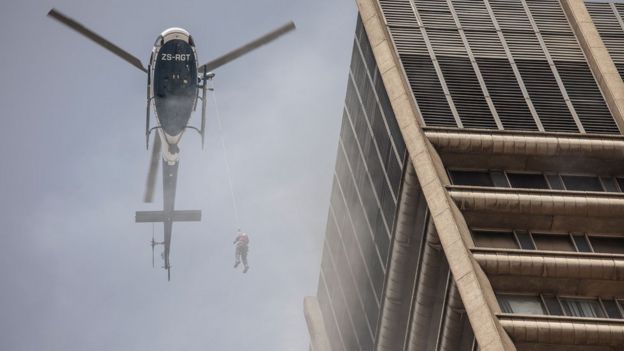 One firefighter was rescued from the building by a police helicopter

The firemen discovered the building had no water too late – and three men who had gone into it to save lives, lost theirs.

Twenty-eight-year-old Simphiwe Moropane was the first to die in the tragedy, after he slipped and fell from the 23rd floor.

He had run out of oxygen and had gone to the ledge to try to get air, fellow firefighters revealed at the memorial service held at Ellis Park stadium on Wednesday.

"I couldn't even recognise him. I had to search his pockets to find a form of identifying him – that's how crushed his body was," Mr Zwane told mourners.

The City of Johannesburg tweeted updates from the memorial, using the hashtag "JoburgsBravest".

The two other firefighters, 40-year-old Mduduzi Ndlovu and 37-year-old Kathutshelo Muedi, suffocated to death after they became trapped in the building.

Family members sobbed and comforted each other during the memorial as the details of the tragedy were shared.

Investigations into what caused the fire are on-going but many believe the men were doomed from the beginning because of the shoddy state of the building.

It was old and the lifts were not working, so the firefighters had to walk all the way up to the 23rd floor where the blaze started. Not a single floor had water, the memorial was told. 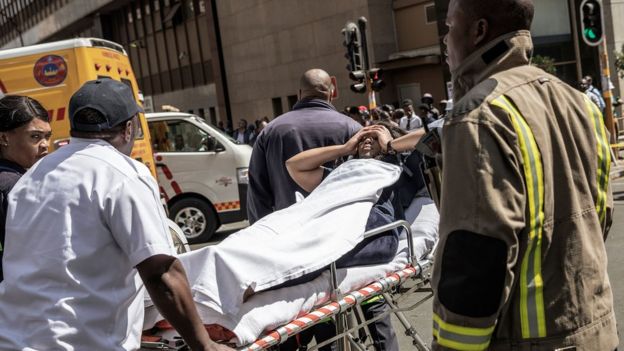 The building housed the departments of health, human settlements and cooperative governance and traditional affairs for Gauteng, South Africa's wealthiest province – home to Johannesburg and the capital, Pretoria.

A government report that has surfaced in the last few days revealed that the building was only 21% compliant with occupational health and safety standards, as opposed to the expected norm of 85%. 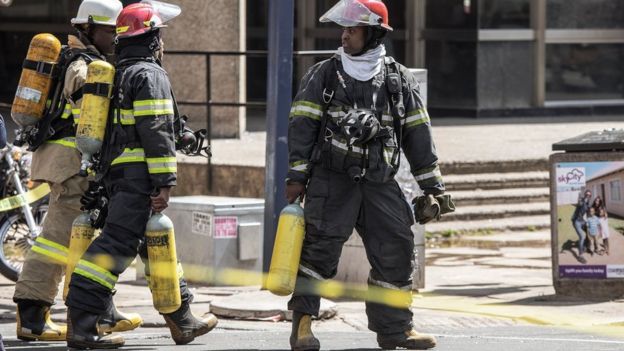 Firefighters told mourners the emergency service desperately needed extra funding
The report was commissioned in 2017 by the Gauteng Infrastructure Development to assess various buildings around the city.

Many have questioned why the government was still being used as office space, knowing it was below standard.

At the time of the fire, 14 people were working in the building, which opened in 1970 and is still known as the Bank of Lisbon.

Jacob Mamabolo, the provincial minister, said his department was working on a project that would ensure all government buildings in Gauteng were refurbished.

But the timeframe on this is unclear.

Days after the deaths, Johannesburg Mayor Herman Mashaba, whose opposition Democratic Alliance (DA) took control of the City of Johannesburg from the ruling African National Conference (ANC) after local elections in 2016, said his municipality had inherited more than "500 problem" buildings from the previous authority.

He alleges that he has faced opposition from the government when trying to clean up the city, including ridding it of unsafe buildings.

'I lost my husband, my best friend'

The outpouring of grief continues, and the funeral for Mr Moropane was broadcast live on SABC television – the public broadcaster – for more than two hours on Friday.

On the day of the fire, his wife posted on Twitter: "#JoburgFire today I lost my husband, my best friend, father to my children. I love u so much."

In response a crowd-funding page was set up to pay for the funeral and education of their children.

Mr Ndlovu's fiancée, Thanda Ngcobo, is quoted in local media as saying that she still can't come to terms with her partner's death.

The couple had two children together – an 11-year-old and a 10-month-old.

"I really don't know what I will do without him. How I will raise these two kids without him because he was doing everything for them. He had plans for them," she is quoted as saying by Drum magazine. 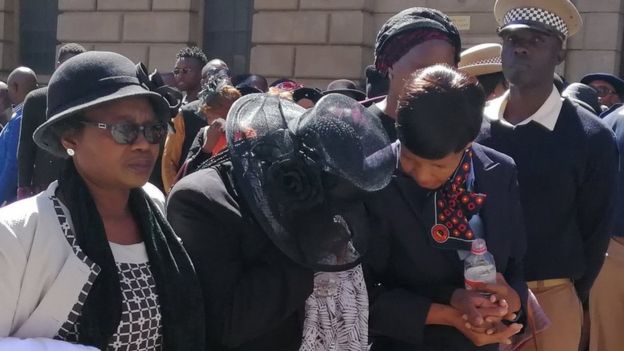 Family members were distraught at the wreath-laying ceremony

#JoburgFire today I lost my husband, my best friend, father to my children. I love u so much pic.twitter.com/FEbLONGJdJ

At a wreath-laying ceremony at the Lisbon building before the memorial service on Wednesday, many family members broke down.

Some of those attending the event carried banners demanding a monthly "danger allowance" of 4,000 rand ($270; £205) for civil servants made to work in unsafe working environments.

Zwelinzima Vavi, a veteran trade union leader, has promised to sue the government over what he alleges is negligence.

There are also concerns about the poor funding of the emergency services. About five million people live in Johannesburg and for the city and surrounding areas, there are only 28 fire engines – four were added to the fleet this year.

In response, many have described the work of a firefighter as a calling not a job.

Scores of firefighters raised their helmets in salute at the ceremony, vowing to serve their communities in honour of their fallen comrades.

On social media, a fireman's prayer has been widely shared: "And if, according to my fate. I am to lose my life; please bless with your protecting hand my children and mate."