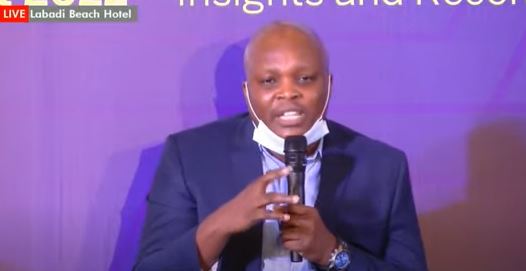 A Financial Consultant and Senior Lecturer at GIMPA, has stated that the numerous taxes imposed on businesses by government have the potential to cripple them.

Speaking at the Graphic Business/Stanbic Bank Breakfast Meeting on Tuesday, November 2, 2021, Dr Randolph Nsor-Ambala expressed disquiet about the relevance of some of the taxes.

“Taxes are supposed to be paid after profit has been made, they’re supposed to be paid either quarterly or annually at the end of the year. Government is basically pushing its inefficiencies unto businesses and saying ‘we are not properly able to assess you. So, on every single transaction that you do, we are going to collect a tax,’ he said.

Dr Nsor-Ambala believes that if these taxes are reduced, it will improve the cash flow situation of businesses to enable them plough back resources to expand and employ more people, thus helping to address the huge unemployment challenge confronting the country.

He contended that the private sector has the capacity to change the narrative with regard to unemployment. However, government has not empowered it enough to address the challenge.

“The blueprint that has been applied everywhere in the world where unemployment challenges have been solved is to trust the private sector, allow them to build enough agility, enough absorption capacity, put them in the best place where they can expand their businesses because ultimately, they are the ones who can deal with that level of diversified group of individuals seeking employment,” he said.

He, thus, urged the government to provide the necessary support to the private sector.