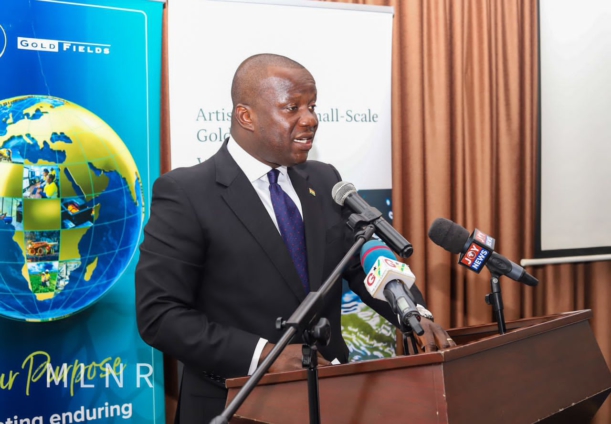 The Minister for Lands and Natural Resources, Samuel A. Jinapor, has sought to ignite the interest and role of large-scale mining companies in the fight against illegal small-scale mining by reminding them of their quintessential duty to protect the environment.

“We cannot have one aspect of the industry promoting environmentally-sound practices, while the other is destroying the gains made. We must work together, and with host communities, to safeguard our environment, and provide opportunities for host communities to reduce the appetite for venturing into dangerous activities like illegal mining”, he said.

The Minister said with both sectors sharing the common aim of exploiting the country’s mineral resources to serve the interest of the public, it is paramount that they exchange ideas, experiences and resources where necessary to allow for the responsible and sustainable exploitation of the mineral resource.

He also commended some mining companies in the country for ceding parts of their concessions for government’s innovative and laudable Community Mining Scheme initiatives.

Mr Jinapor made this statement when he delivered the opening remarks at the World Gold Council Workshop on Monday, November 21, 2022 in Accra.

“Large-scale mining and small-scale mining, are two sides of the same coin. They are both aimed at exploiting our mineral resources for the benefit of our people, using different methods and resources. They can, and they must mutually co-exist. I must commend, here, some of your members, who have voluntarily ceded part of their concessions for community mining schemes. But that should just be the beginning, large scale mining companies that use highly skilled methods must work closely with small-scale miners to ensure that they, also, mine responsibly,” he said.

Describing the discussion as timely, the Minister implored the large-scale mining companies not to downplay the important role they play in the fight against illegal mining.

Aware of this, he said government is ever-ready to engage and collaborate with large-scale companies on the gamut of measures being rolled out by government to address the challenges in the small-scale mining sector.

The measures include the rollout of the Community Mining Scheme, deployment of anti-galamsey taskforce known as Operation Halt II and permanent deployment of river wardens are all meant to prevent the destruction of the environment by illegal miners, promote and develop the small-scale mining sector.

The Minister promised that despite the giant strides made in the fight against illegal mining, government will not take its foot off the pedal and will continue to seek to fight the menace until it is satisfied that the country’s water resources are safe for future generations.

Mr. Edward Beckham, Senior advisor of the World Gold Council appealed to countries to adopt responsible and sustainable ways to exploit their resources.

He said the workshop will lead to the exchange of knowledge and expertise on effectively harnessing mineral resources for the growth of the country while protecting the environment.

The three-day workshop is being attended by nine mining large-scale companies including Gold Fields, Anglogold Ashanti and Newmont Africa as well as representatives of small-scale mining firms.

DISCLAIMER: The Views, Comments, Opinions, Contributions and Statements made by Readers and Contributors on this platform do not necessarily represent the views or policy of Multimedia Group Limited.
Tags:
environment
large and small scale mining firms
Mining
Samuel Jinapor