World Cup 2022: Morocco hope for ‘breakthrough’ for Africa in quarter-final against Portugal 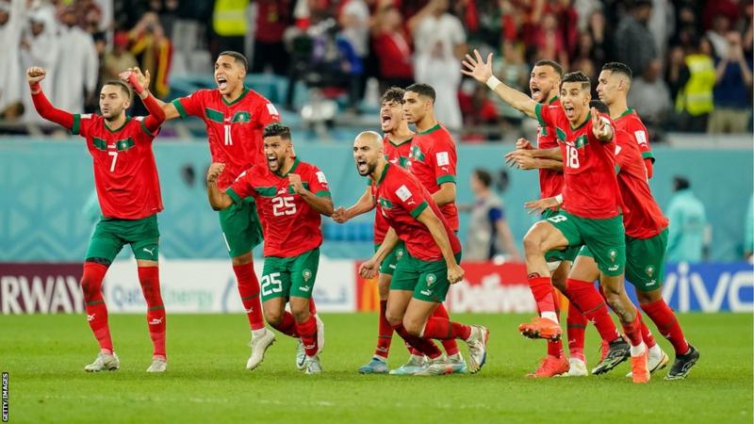 As Morocco stand on the brink of World Cup history for Africa, the Atlas Lions can draw strength from the handful of firsts the country has already achieved at the finals.

Never before has an African team reached the semi-finals, with Cameroon (1990), Senegal (2002) and Ghana (2010) all failing to make it through last-eight ties.

Yet should Morocco eliminate Portugal – whom they beat in 1986 to become the first African team to reach the second round – on Saturday then the Atlas Lions will have scaled new heights for both the continent and the wider Arab world.

“If Morocco win, it will be a breakthrough result,” Moncef Belkhayat, the country’s former minister of youth and sports, told BBC Sport Africa.

“It really will create a fantastic energy on both a social and an economical front.”

Now in charge of the state-of-the-art Mohamed VI training complex in the capital Rabat, Belkhayat says “40 million Moroccans” are behind the team.

“There is a lot of joy. Everyone is becoming a fan and wants to go there,” he explained.

The North Africans were also the first side from the continent to win a point at the finals (in 1970) and became the first to ever top a World Cup group 36 years ago to make the last 16.

Morocco repeated that latter feat in Qatar with a draw against 2018 runners-up Croatia, and wins over Belgium – ranked second in the world – and Canada in Group F.

Prior to this week their sole knock-out clash had been a narrow defeat by West Germany, but, nearly four decades on from that failure, history was rewritten with a sensational victory over Spain on penalties.

“You have to have humility – but also ambition. Why not dream about winning the World Cup? It might not happen today, or in four years or in 12 years, but it might just happen.”

Morocco have impressed in Qatar with steely defensive displays, conceding just once in four matches, and midfielder Sofyan Amrabat has caught the eye with his relentless running and tackling.

“We have always been able to play beautiful football but I think in this World Cup, it’s very impressive to me how the players fight for each other,” former Morocco midfielder Rachid Azzouzi told BBC Sport Africa,

“No-one puts the ego above the team and they sacrifice themselves for each other. This is the skill you need in the World Cup.”

Morocco’s success has come under a coach who was only appointed in August and who took charge of his first game just three months ago.

Walid Regragui came in to replace Vahid Halilhodzic, who gave the team a solid structure but fell out with key players, on the back of his success with Wydad Casablanca, where he won both the league and African Champions League titles earlier this year.

Even though the appointment of the 47-year-old was widely popular, some fans of rival clubs and pundits questioned his credentials – labelling Regragui ‘avocado head’ as a dig at his bald head.

Their criticism has evaporated during the run in Qatar, and his baldness has become a lucky omen – with players touching his head before games to revive memories of Laurent Blanc and Fabien Barthez in France’s 1998 success.

The close ties quickly fostered between coach and squad have been evident, with players hurling Regragui into the air after both their qualification for the last 16 and having seen off Spain.

“We succeeded in creating a family, and we feel there’s a whole country behind us,” Regragui said.

“We have Africa and Arabs behind us – that’s important – but we are playing first for Morocco.”

Players’ families have stayed close to the squad in Qatar, with pictures of right-back Achraf Hakimi kissing his mother after beating Spain going viral.

Having played at the 1994 and 1998 World Cups and won 37 caps, Azzouzi has been impressed by the spirit created by Regragui in a short space of time.

“I think the coach has managed to form this unit and that is his greatest achievement,” the 51-year-old said.

“He’s close to the players and I think every player has respect for him and wants to [follow] his plan.”

Long queues have formed outside airline offices in Morocco to get tickets to travel to Qatar, with state carrier Royal Air Maroc laying on seven extra 300-seater planes.

Ousama Ouaddich, waiting outside the company’s Rabat office in the rain on Thursday night, said he had managed to buy a ticket for the match but did not yet have a flight.

El Amri reports that parts of Doha are “like the corniche in Casablanca” as members of the Moroccan diaspora flock to Doha to soak up the atmosphere and offer their support.

“I’ve met people not only living in the Gulf region but coming in from as far as California,” he added.

“Besides the Argentina fans, the Moroccan fans have been by far the most numerous, the most joyful here.”

With the capacity of the Al Thumama Stadium standing at 44,400, thousands of travelling fans are finding tickets difficult to find.

“I’m still trying but we really cannot get tickets,” said Mohamed Dida, a 32-year-old Moroccan who has been living in Doha for the past decade.

Victory over Spain sparked raucous street celebrations across the country – from Rabat to Marrakech and Tangiers to Fez – with Moroccan communities in European capitals and beyond also joining in, with flares set off and flag-waving, cheering, singing and drumming continuing into the early hours.

“It just so great to see the outpouring of emotion and support,” Algerian-Canadian journalist Maher Mezahi said.

Beat Portugal, and those scenes would be repeated – but on an even greater level.

“I’m sure it will mean a huge party across Morocco and the world,” said Safaa Kasraoui, a staff writer at Morocco World News based in Rabat.

Morocco could have hosted the tournament in 2026 yet were well beaten by a joint bid from the United States, Canada and Mexico.

There are now aims to return and bid to host in either 2030 or 2034, but go all the way in Qatar and the trophy will end up on African soil by the end of the year.

DISCLAIMER: The Views, Comments, Opinions, Contributions and Statements made by Readers and Contributors on this platform do not necessarily represent the views or policy of Multimedia Group Limited.
Tags:
Morocco
Qatar 2022