Polio can only be prevented through immunisation

Nigeria has gone three years without a case of polio, putting it on the brink of being declared free of the disease.

This is a dramatic change from 2012 when the country accounted for more than half of all polio cases worldwide, the World Health Organization has said.

But it will be several months before the country can officially be labelled polio-free.

The first criteria, no case for three years, has been achieved.

But now the WHO needs to make sure there is a robust surveillance system in Nigeria to be certain that there are no further cases of the wild polio virus, chairman of Nigeria's polio committee, Dr Tunji Funsho, told BBC Newsday. 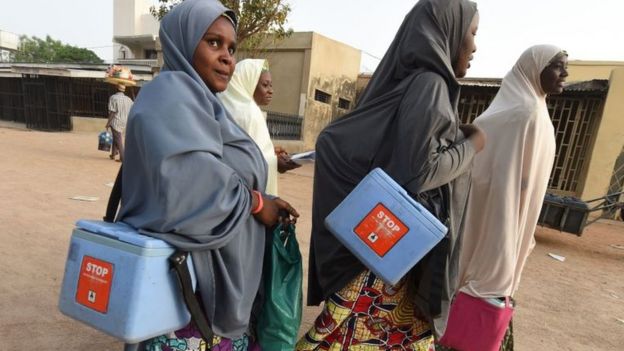 Health workers have been vaccinating people against polio across northern Nigeria

Nigeria is the last country in Africa to have witnessed a case of polio - in Borno state, in the north-east. Outside of Nigeria, the last case on the continent was in the Puntland region of Somalia, in 2014.

Insecurity in the north-east of Nigeria had hindered the polio vaccination programme, but success in fighting the Boko Haram militant group has been cited as one of the reasons behind getting polio under control.

In addition, officials have said that political support and an injection of funds have also helped.

In 2018, there was a total of 33 polio cases confined to just two countries: Afghanistan and Pakistan.

An achievement for Africa

This is not just a milestone for Nigeria but also for the rest of Africa.

The newly re-appointed WHO Africa head Dr Matshidiso Moeti said the continent is "on the verge of an extraordinary public health achievement; one which will be our legacy to our children and children's children".

They must first be sure that every part of the continent has been reached and no cases have been missed.

For now, there are renewed calls to vaccinate children against polio.

It has taken the effort of thousands of volunteers who have risked their lives in some instances to deliver the much-needed vaccines to all parts of the continent.

But "to end polio, at least 95% of children must be vaccinated, no matter where they live," says WHO head of polio eradication Michel Zaffran.