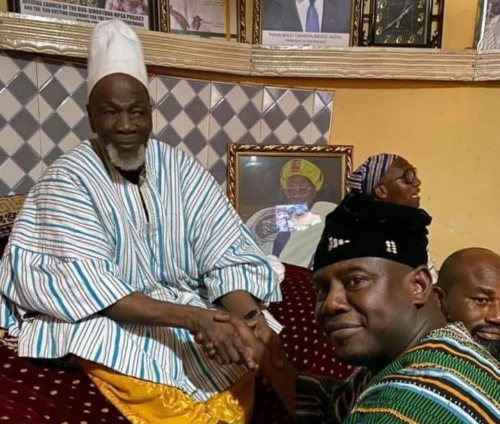 Ya-Naa Abukari Mahama II and paramount chief of Mion, Abdulai Mahamadu, have praised Farouk Aliu Mahama for his efforts in addressing the challenges that face the traditional capitals of Dagbon and Yendi constituency at large.

The two chiefs praised the NPP aspiring parliamentary candidate in the Yendi constituency when ¢300,000 Mortuary Fridges he procured to use at the Yendi Hospital were carted to their palaces for their inspection and blessings.

The Ya-Naa said he welcomes such development in the Dagbon kingdom and called on well-meaning citizens of the area to walk the path Farouk Aliu Mahama has long charted.

On his part, the Mion-Lana said the politician is a generational leader and he is proud of his moves.

He was happy the young man has come to fill a void adding he’s not surprised about what Farouk Aliu Mahama was doing.

The paramount chief prayed for him to succeed in whatever he is doing and invited others to do the same.

The two king’s accolades come on the back of the numerous development projects undertaken by Farouk Aliu Mahama with the latest being the refurbishment of the Yendi Mortuary.

In the last quarter of 2019, he took up the challenge to transform the dilapidated Yendi mortuary to a befitting standard.

The move is to restore the operation of the facility to reduce the sufferings of the people and end the 30 years challenge where simple mortuary services could not be accessed.

He told reporters he is fully committed to using his experience and network to build a Yendi that brings progress and development for all.

The Chief Imam of Yendi, Mahama Zakari Baba, presented the fridges to the Yendi Hospital and they were received by Dr Abdulai Ayuba on behalf of the hospital.

He thanked Farouk Aliu Mahama for what he described as distinguished support to the hospital.