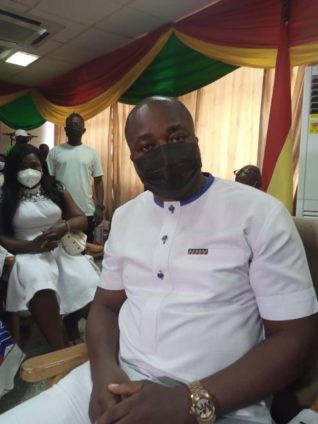 This was after he secured 28 ‘Yes’ votes representing 97 per cent of the 29 Assembly Members present and voted.

The election was in accordance with the Local Government Act which requires that the President should nominate a candidate for the position and the nominee must secure the yes vote of at least two-thirds of Assembly Members present and voted.

Even though the TMA has 31 Assembly members made up of 21 elected and ten government appointees, two of the members did not show up and one voted no in the election conducted by the Electoral Commission.

In his maiden speech, the new MCE thanked President Akufo-Addo and the assembly members for the nomination and confirmation respectively for the confidence reposed in him.

For him, this showed that democracy was about good collaboration, communication and trust.

Mr Quartey said he would hold Mr Ashitey to task for the contents of his acceptance speech stressing that, “you are supposed to be the referee, not the player, be very objective and ensure that the Assembly works, don’t fight anybody’s fight for him”.

He urged him to hit the ground working by next week and ensure that discipline was restored in Tema.

Greater Accra Regional representative on the Council of State, Mr Enoch Teye Mensah, Mr Isaac Ashai Odamtteng, the Tema East MP and former Tema MCE as well as Mr Yves Hanson-Nortey, Tema Central MP all called for support and collaboration from stakeholders for the new MCE while giving the assurance that they would work closely with him.

Mr Yohanes Amarh Ashitey is a 43-year-old graduate of the University of East London and is a Telecom Engineer with 17-years’ experience in corporate engineering specifically mobile and fixed networks.

The MCE is also a former lecturer at Cavendish College, in the United Kingdom, a graduate of the Kwame Nkrumah University of Science and Technology (KNUST), and Presbyterian Boys SHS-Legon.

With over a decade of experience in frontline politics, he has served in several capacities in the Tema East Constituency of the New Patriotic Party (NPP) as Elections Coordinator, Technical Advisor, and patron of some committees of the party in the 2020 General Elections.

He was also the chairman of the NPP’s youth wing campaign team for both the Presidential and Parliamentary elections in 2020.

As part of his achievements, he is credited with improving network availability from 94 per cent to 99 per cent in his first year as the Regional Manager of Huawei for Volta and Eastern Regions.

He is said to have empowered some youth in Tema through his educational support programme which provided scholarships for needy but brilliant students, as well as created jobs for some unemployed youth.