You're a pauper if you earn ¢70 a year so you will not pay E-levy - Western Region Minister - MyJoyOnline.com 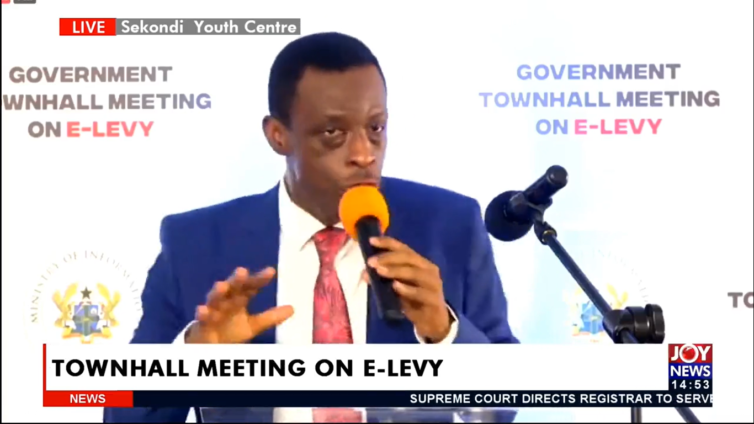 According to the Minister, poor people in the country will not be qualified to pay the tax when government begins its implementation.

He explained that this is because, “in Ghana, a pauper is someone who earns GH₵70 the whole year. However, the levy will apply to a daily transfer of more than GHC100, so if you earn enough to be able to transfer this amount everyday, then you have to contribute to the development of the country.”

The e-Levy has been the bone of contention since government presented its 2022 Budget statement to the House last year.

The Finance Ministry argued that the move will increase the country’s tax-to-GDP from 13% to a targeted 16% or more and $6.9 billion in revenue, but the Minority insists that the 1.75% tax is a tool to aggravate the sufferings of the citizenry.

However, speaking at a Townhall Meeting on Wednesday, Mr Darko disputed the Minority’s claim arguing that government has exempted electronic transactions less than GH₵100 a day.

Thus, poor individuals who transfer within the limit would not pay the 1.75 percent charge.

“So I don’t agree that the e-levy will aggravate the plight of the poor. That is not the intention. The poor won’t pay this tax,” he stressed.

He, however, noted that the tax policy is targeted at the middle-income individuals of the country.

Citing the popular adage, “to whom much is given, much is expected,” Mr Darko-Mensah encouraged people who are paid more that GH₵3,000 to support government.

“Ghana has given you more. We are the people in the middle income and in every country the well-to-do are those who support the country.

“We cannot shirk our responsibility as middle income people and blame government,” he stated.