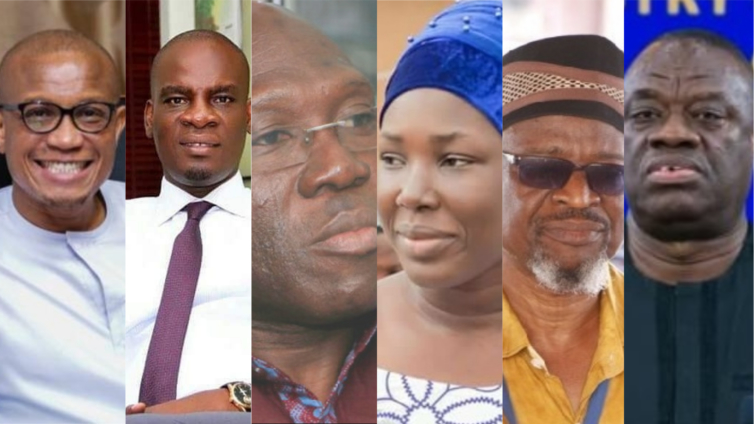 The New Patriotic Party (NPP) and National Democratic Congress (NDC), the two major political parties in the country, have become very attractive to young professionals up north especially in the Northern Region.

Before the Savannah and the North East Regions were carved out of the Northern Region in 2019, that Region was considered the stronghold of National Democratic Congress (NDC).

But, going by the figures that came out of the 2020 and 2016 elections, the New Patriotic Party (NPP) made significant inroads in the Region by increasing its parliamentary seats.

This performance, has therefore set the tone for young professionals in the Region to reaffirm their commitment to mainstream politics and hoping to occupy important national positions.

The galaxy of political stars fronting for the two parties in the Region all demonstrated their might in the last general elections through various roles played and created an exciting political momentum despite the ravaging consequences of covid-19 nationwide.

From the NPP side, many young dynamic political leaders emerged and have since been considered worthy materials for appointments in government.

One of the financiers of the NPP in Northern Region who occupied the Ministry for Business Development has already been appointed as Minister designate for Ministry of Tourism, Art and Culture in the second administration of His Excellency Nana Addo Dankwa Akufo-Addo.

He is described as one of the most experienced northern politicians in the Danquah Dombo-Busia tradition. He made a name after contesting the Tamale Central Constituency seat in the year 2004 but lost. In the 2020 elections last year, he eventually pulled the trigger. This time, he won by securing the Karaga seat as well as obtaining high presidential votes for NPP for the first time. The former Northern Regional Minister and former Mayor of Tamale, an Energy Economist, has been tipped to remain in his current position as Deputy Minister of Energy although there had been expectations from the general public to see him as a cabinet Minister in this second term of Nana Addo’s government.

An indigene of Wulensi, a Chartered Accountant, dynamic professional with rich experience in Energy, Mining, Petroleum, Telecommunications, with over 20 years experience in finance and accounting. He bankrolled his party in Wulensi, served NPP Northern Regional campaign dutifully in the 2020 elections.

The Member of Chartered Certified Accountants London (UK) has financed the NPP activities since 1992 whilst working behind the scenes as a professional Chartered Accountant. He served as a collation agent, finance secretary of NPP in 2014-2015, collation officer for Wulensi constituency from 1996, 2000, 2004, 2016.

He has now joined frontline politics having contested NPP primaries twice in Wulensi. In 2012, he singularly built and furnished an office for the party. He also donated 15 motorbikes and 30 packs of roofing sheets to the constituency in 2020 elections as his support for the Parliamentary candidate Thomas Donkor Ogajah. The NPP stalwart, who is the Director of Finance at Genser Energy, also donated a Mitsubishi L200 with 10,000 Ghana cedis.

He previously donated funds for Northern Region NPP campaign and offered support for office renovation as well as supported many NPP volunteer groups in the North.

Whereas many believe he could be considered for a Deputy Ministerial position at the Finance Ministry or Communications, others claim his technical background as a finance guru, especially in project financing, will endear him for a Chief Executive position in one of the state institutions.

Former lecturer of UCC, who served as former Minister for Zongo and Inner City Development Ministry, has already been appointed as the replacement of Hassan Tampuli at the National Petroleum Authority (NPA) after his former Ministry has been scrapped.

Son of former Vice President Alhaji Aliu Mahama and currently the Member of Parliament for Yendi has also been tipped for a Deputy Ministerial position in government following the impressive figures he recorded in Yendi for his party.

He is currently the Minister designate for Defense and MP for Bimbila constituency. He entered Parliament at a tender age and was known as the youngest lawmaker to have won Parliamentary elections in the country. He earned the position through hardwork in his party and in government after serving as the Minister for Defense in the last four years.

MP for Gushegu, used just four months to campaign and succeeded in winning the seat for his party. The young Lawyer earned admiration of many when he served as CEO of National Petroleum Authority (NPA).

NPP Parliamentary candidate for Sagnarigu constituency, who gave ABA Fuseini of NDC a good run for his money after increasing the party’s votes from 7000 in 2016 elections to 28,000 in 2020. She could be heading to another state institution as the head according to information gathered.

Daughter of the late Hon. Saani Iddi, one of the pioneers of NPP in the Nanumba area who was the former MP for Wulensi. Radia is gradually stepping into the shoes of her father in the political arena. The smart dynamic lady holds master’s degree in International Hospitality & Tourism Management from Sheffield Hallam University, United Kingdom. She is currently the National Secretary of Zongo Youth Patriots of NPP, and CEO of Moontouch Travel Limited. She formed the Deaf Youth for NPP to galvanize the deaf community to vote massively for her party in the 2020 elections in many constituencies in the Northern region.

With her bilingual strength in French and English, Radia has been tipped as one of the fast rising politicians from the North.

It is an expectation from the general public and party stalwarts that she could secure an appointment in the current NPP administration.

The Municipal Chief Executive (MCE) for Sagnarigu Municipality earned the respect of her party stalwarts in the 2020 elections when she campaigned vigorously across the Region with her great public speaking skills. She was adjudged best performing MCE in Northern Region in 2018 just after serving two years in office.

The CEO of NABCO initiated a good policy that assisted in curbing the growing unemployment situation in the country. The Nana addo’s government flagship program of Nation’s Builders Corps has been credited to his effort and vision. Although he shockingly lost the Tamale Central seat, he is still expected to play an instrumental role in the second administration of President Akufo-Addo.

The Deputy Chief Executive Officer of MASLOC, who fought hard in the Yendi primaries of the NPP prior to the December 2020 elections, has also been penciled down for a higher position.

The Deputy Managing Director of Agric Development Bank, who was one of the diaspora executives of the party in Germany has been instrumental in helping the party in the North.

She is the deputy Nasara Cordinator of the Northern Region and was selected along the Northern Regional Campaign Team for the 2020 elections due to her confidence and good public speaking skills. Although said to have crossed carpeted to NPP few years ago, she has shown so much determination & commitment to the party and has won the admiration of many. She definitely has a bright future in the New Patrotic Party.

From the camp of NDC

Among the top brass from the NDC side shining and throwing more light on Northern politics, are:

He is considered most influential, all powerful and industrious politically.

The former NUGS President served as Minister for Trade and Industry, Minister for Employment and Labor Relations, Minister for Communications, all in the Mills -Mahama administrations. He is currently the leader of NDC caucus in Parliament.

The former Minister of state, and Member of Parliament for Tamale South, appears very dynamic in the scheme of affairs in Northern politics.

The vociferous Member of Parliament for Tamale Central, and former Deputy Minister of Trade in the erstwhile government who abandoned Nanton constituency where he served as a one term MP and returned to his former constituency in Tamale to take over from Lawyer Inusah Fuseini as the MP for Tamale Central appears constantly strong for his party. He has gained political clouds in the last decade.

The former Minister for Roads and Highways, Lands and Natural Resources, Deputy Energy Minister, an astute lawyer, has been described as one of the stalwarts from the NDC side who represented Tamale Central for three terms in Parliament, played crucial roles in the Mills-Mahama administrations but recused himself from Parliamentary politics in 2020.

Formerly of Radio Gold, he is currently the Member of Parliament for Tamale North. He secured his second term bid in 2020 following impressive performance recorded in Parliament and in his constituency.

The veteran journalist, known for his proverbs, only smiled at the tail end of his encounter with the fiercest opponent after the December 2020 polls when he escaped narrowly from defeat to secure his third term bid.

He contested the 2020 elections keenly to gain victory for the Gushegu constituency for the NDC. Although he lost, he has hugely been admired for his good performance in the race considering that it was his first time staging the battle as a parliamentary candidate.

The astute lawyer contested the Yendi seat in 2020 on the ticket of NDC with serious determination, but lost.

The former MP for Yendi occupied the seat through hardwork, but subsequently gave way for Lawyer Abdul Fatawu Alhassan.

He contested Parliamentary elections in Tamale and lost, and proceeded to advance his professional career in banking. He subsequently became the Governor of Bank of Ghana after serving briefly as the Deputy Governor in the Mills-Mahama administrations.

These are the top notch political figures positioning the NDC and NPP in Northern Region according to developments up North.