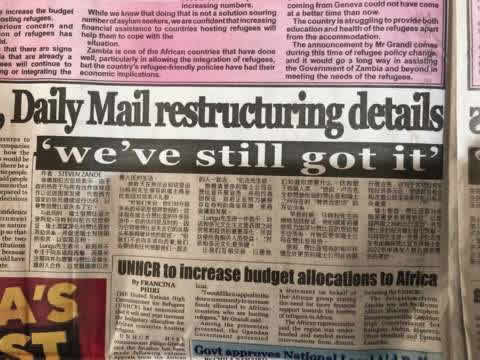 As Chinese influence continues to grow rapidly in Zambia, the state-owned Times of Zambia newspaper has come up with an ingenious way of increasing their revenue – by publishing today's lead story in Mandarin.

The article quotes President Edgar Lungu as saying Zambia "will not look east or west – we will look forward and go with whoever wants to go with us".

Those are comments he made while hosting a Swiss delegation at the presidential palace yesterday.

Reporting the story in both English and Mandarin Chinese is a move aimed at tapping into the Chinese market, says chief government spokeswoman Dora Siliya:

Times of Zambia aiming to increase revenue by targeting Chinese market. Today's edition has a Chinese version of top story. They want to tap into Chinese advertising.
Who moved my cheese? Times of Zambia responding.

One person argued that Gujarati would have been a better language to choose given Zambia's Indian population:

And you say the Chinese aren't taking over? Why can't they learn English? Why Chinese why haven't they considered Gujarati because I believe more people speak Gujarati than Chinese in Zambia.

Another said Zambia's indigenous languages should be favoured over foreign languages as a matter of national pride:

Where is your national pride madam? How can you justify a foreign language in our national paper? Shouldn”™t we put our own languages first?

Zambia has recently been forced to deny accusations that the government has accumulated a lot of debt by borrowing from China and putting up some key public assets, including the national broadcaster and the Kenneth Kaunda International Airport, as collateral.

China denied these allegations as well.

According to the government, Zambia’s current external debt is $9bn (£7bn) with up to 30% of that amount being money borrowed from China.