A new smartphone device allows people to easily measure their blood pressure without a cuff squeezing their arm.

It’s still too early to tell if the tech works accurately, but if it does, it could enable more people, especially in developing countries, to check if they’re at risk for heart disease.

The device, described in a study published today in Science Translational Medicine, consists of a 3D-printed case attached to the back of a smartphone. When a person presses a finger on a button-like sensor, an app is able to calculate blood pressure, according to the study. But the device was tested on so few people — the vast majority of them with normal blood pressure — that it’s impossible to say whether its measurements are accurate, according to several experts.

High blood pressure, or hypertension, can cause strokes, heart attacks, and kidney failure. But measuring blood pressure is notoriously difficult. Simple things like being stressed, drinking a coffee, or dangling your legs off an exam table can lead to inaccurate measurements. Plus, arm-squeezing cuffs are clunky, not portable, and they can be painful to older patients or impractical for people with obesity. So scientists have been trying to create portable, cuffless devices to easily monitor blood pressure multiple times a day. 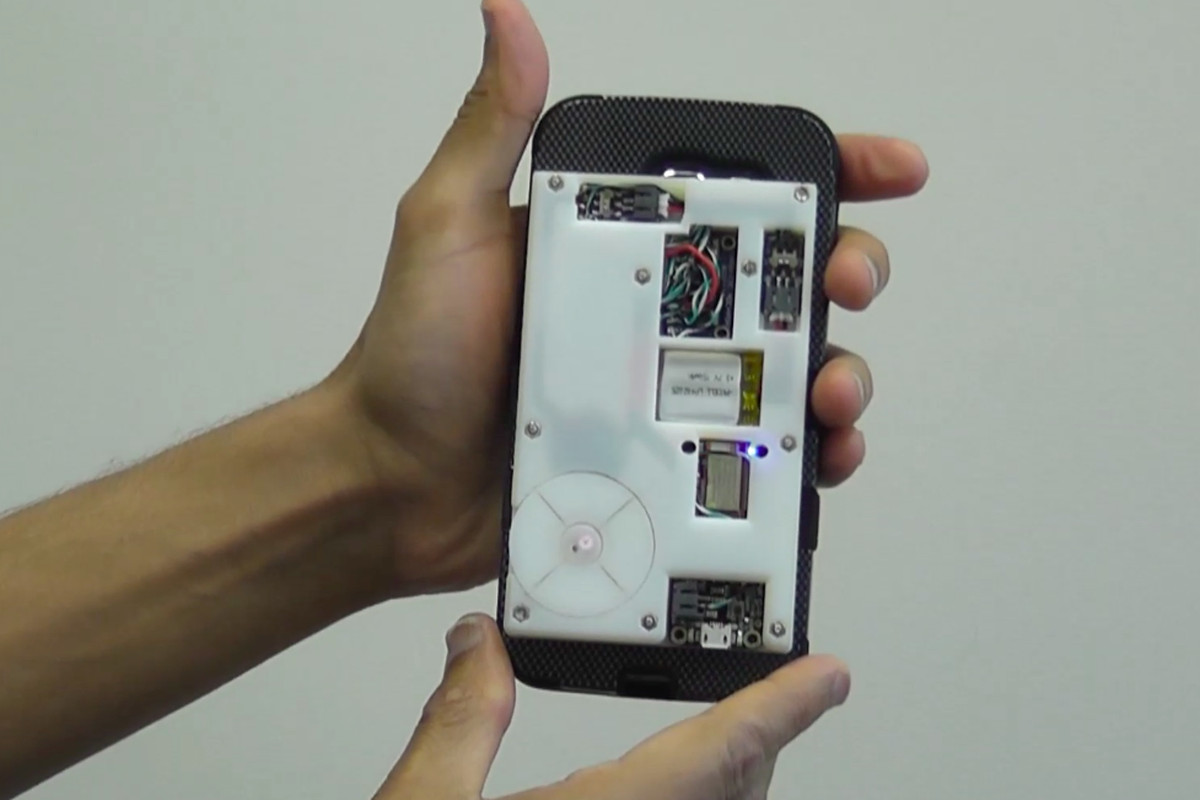 “On the surface, it’s a great idea and people would love to have it,” says Edgar Raymond Miller, a hypertension expert at Johns Hopkins University School of Medicine, who was not involved in the study. “The big issue comes with precision.”

Timothy Plante, an assistant professor at the Larner College of Medicine at the University of Vermont, agrees. While it would be a “game-changer” to use a smartphone to measure blood pressure, it’s still too early to say that this device works. He’d like to see research on how well it works among people with high and low blood pressure. Otherwise, it’s impossible to know if the device is accurate enough for at-home use.

Many have already tried to create cuffless devices and failed. One smartphone app called Instant Blood Pressure, for instance, asked users to place their smartphone against their chest and a finger over the camera to take a measurement. But research by Plante, Miller, and Seth Martin at Johns Hopkins showed that the app couldn’t identify high blood pressure in eight out of 10 patients. “That’s really scary,” says Martin, an assistant professor of medicine at Johns Hopkins. “People are relying on those readings.” (The app is no longer available.)

The device described in today’s study also doesn’t use a cuff; instead, it’s like a smartphone case with sensors. It works this way: you press a finger on a sensor on the case so as to cut blood flow to an artery in your finger. An app tells you how much pressure to apply, and then it displays your blood pressure reading. “The fingertip is the most natural place to press,” says study co-author Ramakrishna Mukkamala, a professor at Michigan State University’s College of Engineering. “That makes this whole finger-pressing approach viable.”

The device was tested on 30 people, and 90 percent of them could use the device correctly after practicing one or two times. The smartphone measurements were tested against a finger cuff device, and they were just as accurate, Mukkamala says. But finger cuffs are “notoriously inaccurate,” Plante says. “I would take any comparisons with a couple spoonfuls of salt.” (The smartphone-based device also showed errors relative to a standard arm cuff that are large enough to suggest it can’t entirely replace the cuff.)

The study is still early, and most of the people tested in it had normal blood pressure. Before a device is put on the market, it has to be tested on at least 85 people who have a range of blood pressures, says Bruce Alpert, a pediatric cardiologist who’s performed many validation studies for manufacturers of automated blood pressure devices. Mukkamala agrees the group has a long way to go before its device is approved. This study just shows it’s possible, he says. “Can you say we’re ready to go to Best Buy and pick one up? I would say no,” Mukkamala says. “There’s more work to be done.”

Three of the study authors, including Mukkamala, have also patented the technology and licensed it to a company called Digitouch Health. So it’s important that the device is tested and validated by independent researchers that don’t have a conflict of interest, Miller tells The Verge.

Mukkamala believes that, once validated, the device could help people easily check their blood pressure and figure out whether they need medication. Only about 45 percent of people with hypertension in developing nations are aware of their condition, according to the study. “If they are aware, then they can do things in their life to reduce their increased risk of stroke and heart attack,” Mukkamala says. “To me, that’s the exciting thing: it’s to keep people healthier.”

Before that happens, though, the device has to be proven safe and effective. Smartphones “are designed to take pictures, surf the web, make phone calls, send text messages, and launch Angry Birds at pigs,” Plante says. “This doesn’t mean that smartphones can’t be modified to obtain blood pressure measurements, we just need to make sure that any blood pressure-measuring device is accurate.”

My son benefited from GETFund scholarship – Asiedu Nketia confesses
Residents of Sunyani assaulted for defying funeral dress code
Court orders arrest of NPP’s Hajia Fati
Are members of the Armed Forces scuttling a $350m project on the Teshie Beach stretch?
How a Nigerian woman ended up married to two men

Saudi Arabia: What to know before you visit