Almost 200 flights were cancelled to and from Hong Kong Monday, as thousands of pro-democracy protesters shut down one of the busiest airports in Asia following violent clashes with police over the weekend.

Hundreds of passengers were left stranded after all departing flights and more than 70 arriving flights were cancelled in the early evening, amid chaotic scenes inside the airport as thousands of demonstrators descended on the main terminal.

The abrupt decision by authorities to suspend flights was interpreted by protesters as a signal that riot police would soon attempt to clear the airport. Fearing a repeat of the violence that has characterized recent demonstrations, the majority of protesters began to leave, with many choosing to walk home along the highway.

The latest development came as Beijing ramped up its rhetoric about the protests, which one official said "showed signs of terrorism." 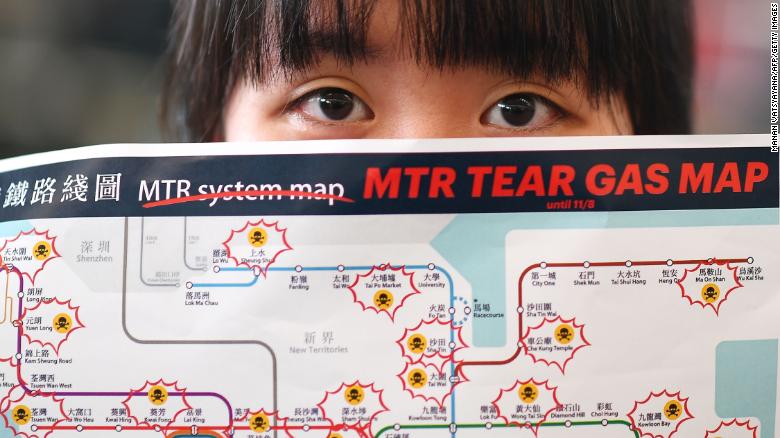 Pro-democracy protesters gather against the police brutality and the controversial extradition bill at Hong Kong's international airport on August 12, 2019.

Monday's mass demonstration was not the first to target the airport, with protest organizers viewing the international hub as a way to communicate their struggle with a global audience.

Many activists have also come to view the airport as something of a safe protest space away from the streets, where clashes between demonstrators and police have become commonplace.

There was renewed outrage at the intensity of those clashes this week, after police and pro-democracy activists fought pitched battles on the streets across several districts of the city on Sunday.

Officers in riot gear pursued protesters into subway stations, where they were recorded firing tear gas in enclosed environments and at close range. One police officer also suffered partial burns to his leg after being hit by a petrol bomb. 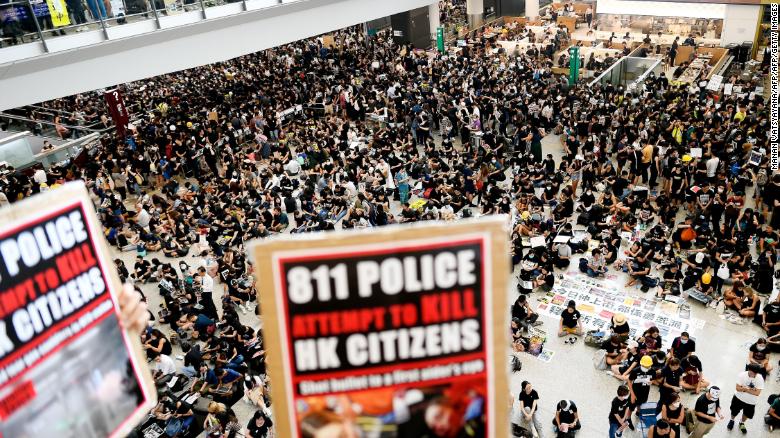 Pro-democracy protesters gather against the police brutality and the controversial extradition bill at Hong Kong's international airport on August 12, 2019.

One female protester was seen being treated by paramedics, after she was hit in the face by a beanbag round. Unconfirmed reports that she had potentially lost an eye were circulating Monday, with calls for an "evil police eye for an eye" protests to be held in response, with the airport as the primary target.

Speaking to CNN at the airport Monday, protester Patsy Ko said the images from Sunday evening were the catalyst for her joining the rally there -- her first time taking part in the anti-government demonstrations.

"It is really sad for the people who were injured, I could not sleep last night," she said. 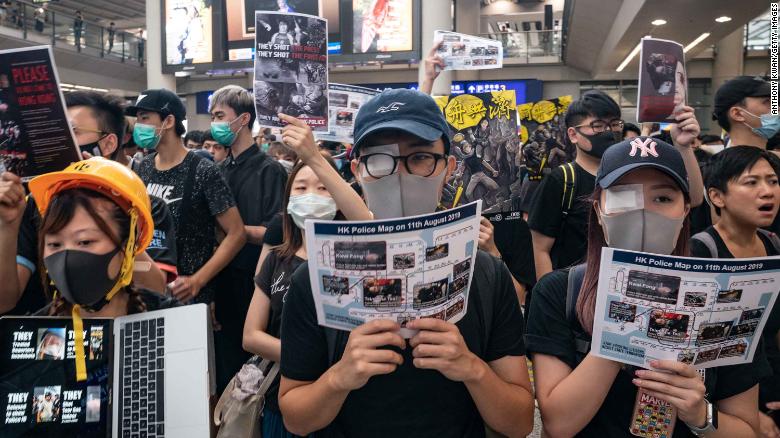 Protesters occupy the arrival hall of the Hong Kong International Airport during a demonstration on August 12, 2019 in Hong Kong.​​​​​​​

Many protesters Monday wore eye-patches in reference to the woman's injury and handed out pamphlets and pasted posters showing photos of alleged police brutality throughout the protests.

"It was wall-to-wall people chanting, 'Don't trust HK police' and providing maps of MTR stations that had been attacked in the last couple of days, and where people had been beaten up by the police," one tourist told CNN on arriving at the airport.

While many visitors were sympathetic, others expressed their frustration at the protesters, blaming them for the disruption and flight cancellations, with little information available as to when they might be rescheduled.

The sudden decision to shutdown the airport came as the city's protest movement entered its 11th week, with no sign of either side backing down. 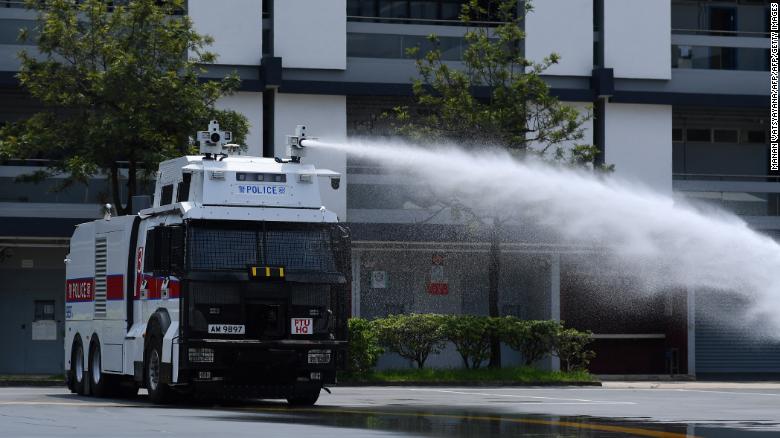 Earlier on Monday, as crowds began to descend on the airport, Chinese officials called for the authorities to exercise an "iron fist" in tackling "violent crime" in Hong Kong.

"They have already constituted serious violent crimes and have begun to show signs of terrorism. This is a gross violation of the rule of law and social order in Hong Kong, which is endangering the lives and safety for Hong Kong citizens." 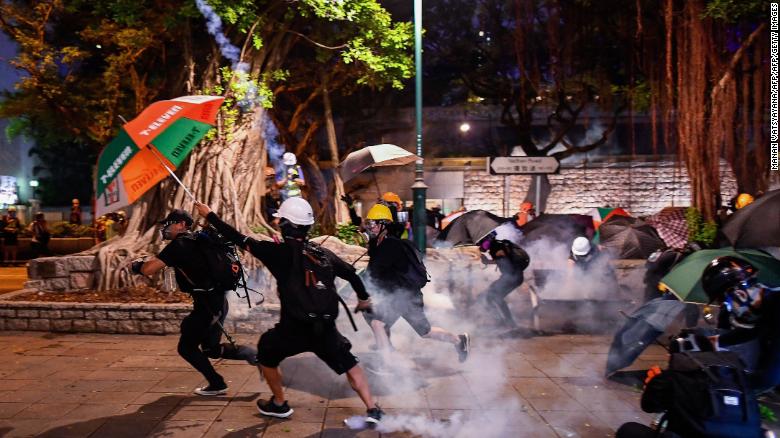 Pro-democracy protesters throw back tear gas cannisters in Tsim Sha Tsui district during a demonstration against the controversial extradition bill in Hong Kong on August 11, 2019.​​​​​​​

Use of the term terrorism to describe the Hong Kong protests, even in a somewhat backhanded way, is a major rhetorical shift in how China has described the protests.

In domestic propaganda, there has been a noticeable transition in recent weeks in how the protests are covered. State media reports initially refrained from mentioning the demonstrations, amid heavy censorship, as is usual for anti-government actions anywhere in China. But increasingly reports have moved to emphasize the violent side of the protests -- and sought to paint the protesters as separatists being controlled by the United States and other foreign "black hands."

Suggesting those protesters are also committing acts of terror could open the door for Beijing to crack down on Hong Kong, either by ordering the local police to escalate their use of force, or even by deploying the People's Liberation Army (PLA) in the city.

The PLA can be deployed in Hong Kong if the local government requests it, in order to assist with a major breakdown in public order. Local officials have previously refuted any suggestion they would do so.

Earlier Monday, Hong Kong police showed off a riot control vehicle with water cannon, previously never used in the territory, while across the border in the mainland Chinese city of Shenzhen, video was released showing the People's Armed Police, a state controlled paramilitary organization, conducting major exercises seen as a potential signal to protesters in Hong Kong.