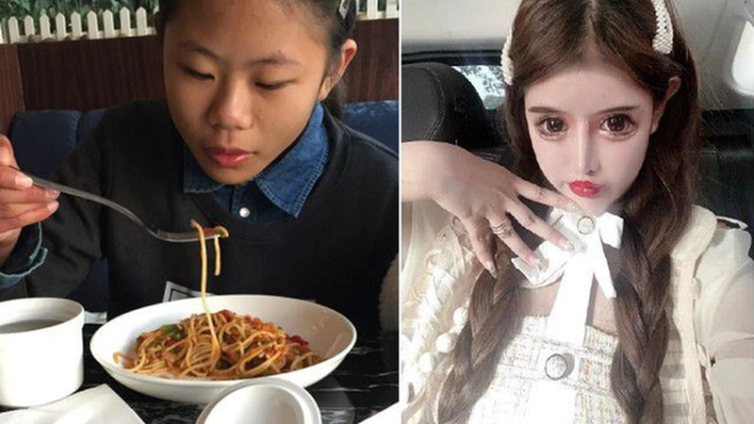 A 16-year-old girl known as “China’s youngest plastic surgery addict” claims to have undergone not less than 100 invasive cosmetic procedures over 3 years, in a bid to improve her looks.

Zhou Chuna, with over 300,000 followers on microblogging platform Sina Weibo, has built her online career on plastic surgery, documenting her extreme transformation from a normal-looking girl to a doll-like idol over a period of three years.

She’s not the only girl to have turned to cosmetic enhancements at a very young age, but Zhou Chuna’s case is considered unique because of the sheer number of procedures she has done (around 100) in a relatively short period of time (3 years).

Despite claiming to have experienced severe side-effects due to her addiction to plastic surgery, like memory loss and permanent scarring, the 16-year-old says it’s all worth it.

Zhou always tells her online followers that she used to be very ugly before she discovered plastic surgery. She described her eyes as too small, and her nose as too big, and reminisced about how her colleagues made fun of her because of her appearance.

They gave her humiliating nicknames, made cruel jokes and always gave her the hardest tasks on class cleanup duty, while the pretty girls always had it easy. She quickly realized that her life would not get better unless her looks improved.

At age 13, Zhou Chuna started pestering her parents to pay for a double eyelid surgery, a popular surgical procedure among Asian women and despite early resistance, she got them to finance her dream.

People tried to discourage her, saying that plastic surgery would make her look too old for her age, but she only noticed an improvement in how people treated her.

“Everyone’s attitude towards me became more friendly after the double eyelid surgery, and I tasted the sweet fruits of plastic surgery,” the young girl told her followers, adding that it wasn’t long before she went under the knife for the second time, then the third, and so on.

The young girl claims to have spent a small fortune on her plastic surgery addiction, 4 million yuan ($620,000), most of which came from her parents, who own a profitable company.

What kind of parents would support this sort of behavior, you may ask, but Zhou claims that she never gave her family much choice. She threatened them that she would quit school and still find a way to pay for her surgeries if they refused to support her. This way, at least they know she gets operated on by professional doctors, at certified clinics.

“I will never be satisfied with my appearance, I always think I will look better after the next plastic surgery I get.

“Someone once asked me if I have any regrets about my plastic surgeries, but the only regret I have is not having started them sooner,” the 16-year-old said.

Despite her seemingly unrepentant attitude, Zhou Chuna says that her transformation has come at a cost.

Liposuction has caused some parts of her body saggy, the high number of incisions has caused scarring, some of which will never heal, and most worrying of, the frequent anaesthesia has caused memory loss.

It’s hard to prove that it was the anaesthesia that caused her memory to degrade, but she certainly believes so. Still, these problems are not enough to make her quit her habit.

“I am never afraid of pain, I am afraid of ugliness,” Zhou concluded.