2 arrested for parading teenagers naked on the streets of Akuapem-Adawso - MyJoyOnline.com 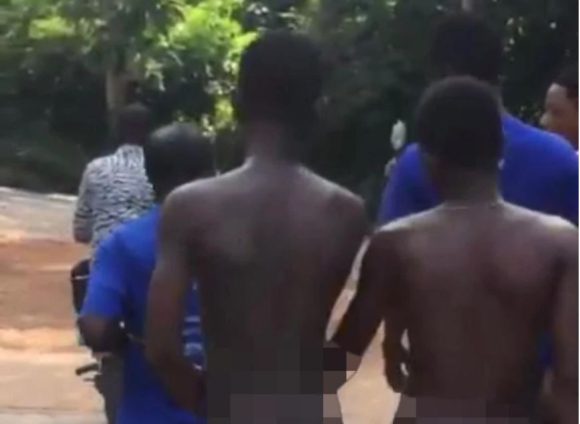 Police have arrested two people in the Eastern Region who stripped two teenagers naked and paraded them on the streets of Akuapem Adawso.

According to the reports, the victims were subjected to this abuse with their hands tied after being accused of allegedly stealing ¢100 and a mobile phone.

The incident which saw the two 14-year-olds assaulted by a mob occurred on Friday, October 29 in the Akuapem North Municipality.

They were paraded without clothes through the Tinkong stretch of the Koforidua -Mamfe highway to the Adawso township.

Five days after the development took place, the Police has stepped in.

A statement signed by the Director-General of Police’s Public Affairs, ACP Kwesi Ofori indicated that the two victims are being chauffeured to the Police Hospital in Accra for medical attention.

Aside from the arrest, the November 3 statement explained that “psychologists have also been assigned to counsel the families of the victims.”

Furthermore, the police also cautioned the public against “engaging in unlawful acts or risk being arrested and prosecuted.”