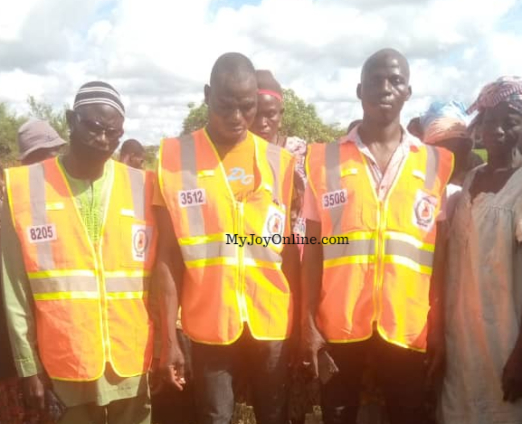 NADMO officers after retrieving the bodies

Three more persons have drowned at Kunufor in the Chereponi district of the North East Region.

The incident occurred on Friday, August 27, when the victims, said to be returning from the farm, attempted to cross the Lamm river after heavy rains.

According to the National Disaster Management Organisation (NADMO) report, four individuals were involved, but one managed to swim to safety and reported to authorities.

Regional Director of the Organisation, John Kwaku Alhassan, said the three bodies which have since been retrieved and buried included a young woman.

The incident brings the death toll to eight following torrential rains in the region.

Two people, including a seven-year-old girl, died in the Bunkprugu Nakpanduri district on Thursday.

Hours later, three young men were also killed by lightning at Tamboku near Dagbriboari in the East Mamprusi municipal.

The sad incident comes as residents across the region are busy in preparations ahead of the opening of the Bagre dam in Burkina Faso.

In the last few days, farmers along the river have been racing against time to harvest their crops as they seek to minimise the impact of the disaster on their livelihoods.