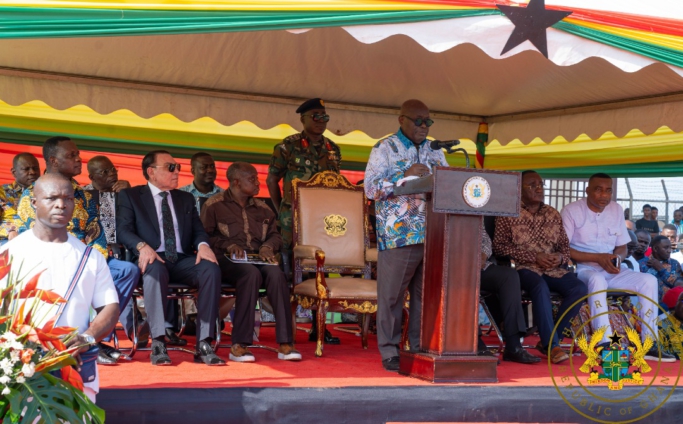 President Akufo-Addo says his government, since 2017, has embarked on the construction and completion of some 32 hospital projects in the Ashanti Region.

He was speaking at the commissioning of the 60-bed Asante Akim Municipal Hospital on Sunday, October 16 2022, as part of his four-day working visit to the Ashanti Region.

President Akufo-Addo stressed that “I am not referring to CHPS compounds and health centres, I am talking specifically about hospital projects”.

Other areas are Akrofuom, Adugyama, Adansi Asokwa, Asokore Mampong, Bantama and Nyinahin, in addition to the construction of a psychiatric hospital in Onwe, in the Ejisu Municipality.

“There are five hospitals being constructed by VAMED Engineering in Manso Nkwanta, Twedie, Sabronum, Drobonso and Suame.

“Under the EUROGET Project, initiated by the NPP under President Kufuor, the Akufo-Addo Government has seen to the completion of the Ahafo Ano North District Hospital in Tepa, and the Asante Akyem Hospital in Konongo.

“As I indicated earlier, the two hundred and 50-bed Ashanti Regional Hospital in Sewua, and the 500-bed Military Hospital at Afari will be commissioned and completed next year,” he said.

The President added, “Again, under my government, the construction of the Komfo Anokye Teaching Hospital Maternity and Children’s Block, which had stalled for 41 years, have been duly reactivated, and work is progressing steadily.

“We are also completing two district hospital projects in Fomena and Kumawu, which were inherited from the predecessor Government.”

“As part of my tour of Ashanti, I will, on Wednesday, inspect ongoing work on the construction of a Trauma Hospital at Obuasi, which is being undertaken by Universal Hospital Group,” he stated.

Commissioning the Asante Akim Hospital in Konongo, which is part of the “Ghana Hospital Project”, initiated by the Kufuor Government in 2008, and executed by EUROGET De-Invest S.A of Egypt, President Akufo-Addo indicated that this is the sixth Hospital he is commissioning under the Project.

“This Hospital has been long awaited in Konongo, and it is good that, today, the demand for a Municipal Hospital of quality has been realised. Residents and surrounding health facilities will now gain access to improved healthcare,” he said.

The “Ghana Hospital Project” involves the design, construction and equipping of one Military Hospital, two Regional Hospitals, and six District Hospitals in Ghana, at a project cost of $339 million. It falls under the broader objective of providing infrastructure for the delivery of effective healthcare to Ghanaians.

Other hospitals being constructed under this contract are the 250-bed Ashanti Regional Hospital at Sewua in the Bosomtwe District; the 60-bed Municipal Hospital at Salaga in the East Gonja Municipality; and the 500-bed Military Hospital, under the Ministry of Defence at Afari, again, here in Ashanti.

They are all expected to be commissioned before the end of 2023.

President Akufo-Addo reiterated the commitment of government to improving access to essential and quality health services through the provision of the necessary health infrastructure, equipment and logistics, including the deployment of appropriate technology, as part of government’s drive to attain Universal Health Coverage (UHC).

DISCLAIMER: The Views, Comments, Opinions, Contributions and Statements made by Readers and Contributors on this platform do not necessarily represent the views or policy of Multimedia Group Limited.
Tags:
Agenda 111
Akufo-Ado
Hospitals in Ashanti Region