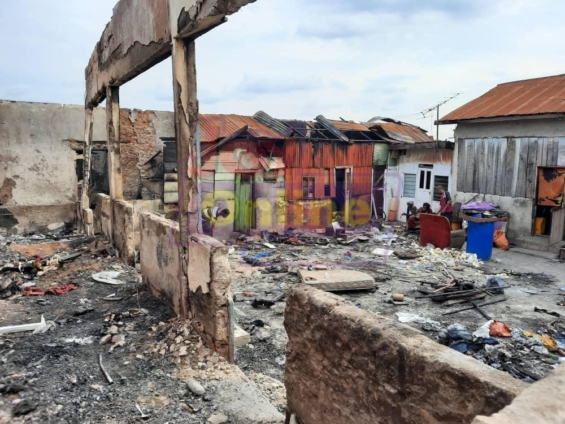 Over 40 persons have been displaced following a fire outbreak at a compound house at Anloga Junction in Kumasi of the Ashanti Region.

The fire is said to have started in a tenant’s room about 2:00 pm on Saturday and spread fast to adjoining rooms destroying properties running into thousands of cedis.

At least 10 out of 13 rooms together with shops were razed down but the fire.

Fortunately, no casualties were recorded.

According to the Manhyia Fire Commander DO I, Amos Abban in the bid to douse the flame, the KNUST fire engine which was dispatched to the scene requested for pumps and Manhyia fire tender was dispatched to support the firefighting which was brought under control at 3:44 pm.

He said preliminary investigation indicated that the fire may have been caused by “electrical issues”.

In his view, the fire intensified when residents tried to put out the flame by themselves.

“Sometimes when the issue comes people try to fight the fire themselves or they don’t call the right number so this might have caused the fire to spread very fast”, the fire officer noted adding that: “It is an old house and we suspect there are some problems with the cable system.”

DISCLAIMER: The Views, Comments, Opinions, Contributions and Statements made by Readers and Contributors on this platform do not necessarily represent the views or policy of Multimedia Group Limited.
Tags:
Anloga Junction
Ashanti Region
Compound House
Fire Outbreak
Kumasi