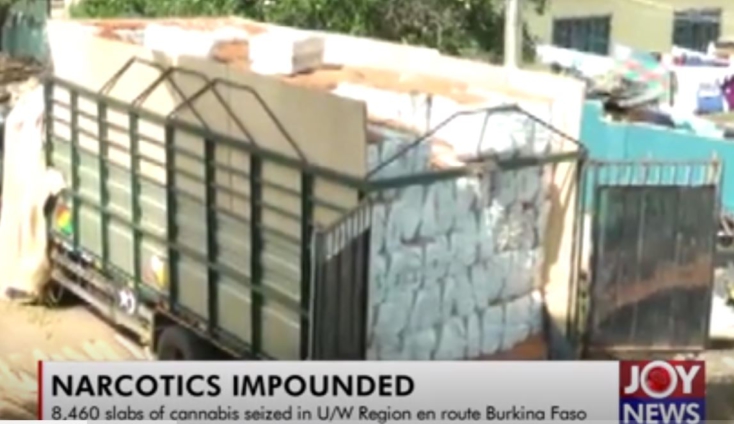 The Bono Regional Police Command has arrested a driver and his assistant transporting over 8,400 slabs of dried leaves, suspected to be cannabis from Nsawkwa in the Tain district to Hamile in the Upper West Region, bound for Burkina Faso.

The substances, carefully packed, were covered with sawdust and other legal goods in a Rhino Cargo truck to outwit security personnel on the way.

The drive and his ‘mate’ who were to be paid ₵7,000 for transporting the weed, claim not to know the owner of the substance.

The 27-year old driver, Ayuba Ali, and his 20-year-old mate, Ametus Sori both natives of Kunnyukuon near Babile in the Upper West Region, claim they were only hired to transport the goods from Nsawkaw in the Tain district to Hamile, close to the border with Burkina Faso.

The truck was loaded with 180 sacks with each containing 47 compressed slabs of dried leaves, suspected to be cannabis.

The Bono Regional crime officer, Nana Kwaku Duah revealed that the suspects will be arraigned before court. He also appealed to the public to help the police with information to end the illicit drug business in the region.