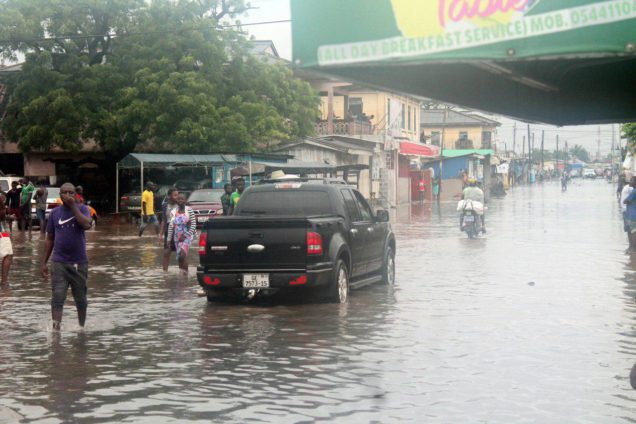 A state-sanctioned audit conducted into flood control drains across the country has found major defects exposing communities to the risk of severe flooding.

The audit by the Auditor-General estimated that more than ¢117 million had been spent by the Works and Housing Ministry between 2015 and 2019 to construct and maintain drains.

However, many of the drains did not meet the required standards due to what it described as ‘poor monitoring of projects’.

The audit points to the National Disaster Management Organisation (NADMO)’s data that acknowledged that between 2015 and 2020, Ghana had 1,446 flood events, which caused 309 injuries and 510 deaths.

During the same period, some 54,744 houses were affected, while an accumulated 136,563 acres of farmlands were destroyed.

The audit had sampled 27 projects across the country and found that 15 had defects.

This was because the Works and Housing Ministry and its implementing agency, Hydrological Services Department (HSD), failed to carry out adequate monitoring and inspection of works to ensure they were done to quality standards and specifications.

The defective projects were also not corrected.

The auditors found that only four projects, out of the 27 that were inspected, had monitoring reports.

They also found that the Ministry’s Hydrological Services Department did not produce Drainage Master Plans (DMPs) to guide the coordinated development of drainage facilities which affected HSD’s ability to plan for the provision of flood control structures in a holistic manner.

More critically, each year, from 2015 to 2019, the HSD fell short of implementing their target of drainage facilities needed to mitigate flooding nationwide.

Over the audit period, 12.2km, that is 11% of the targeted 110km of drains, was constructed and none of the retention ponds targeted for 18 drainage basins had been done.

This was also because the Works and Housing Ministry did not allocate sufficient budget to cover the planned length of drains, and the Finance Ministry did not release funds on time to complete drainage projects; causing the projects to stall.

With these challenges, many communities still face the risk of severe flooding this year, with the rains about to strike.

The Auditor-General has, therefore, recommended that the Hydrological Services Department ensures contractors rectify all identified defects before their respective contracts end and retention monies are released to them.

NADMO ready for any possible flooding

Meanwhile, the National Disaster Management Organisation (NADMO) says it is prepared for any possible flooding across the country.

According to the Communications Director, George Ayisi, efforts are being made to move people to safety when they are affected by the floods.

“I spoke about a certain rescue team being ready, operation team are on standby. When they need us, we will be able to go immediately to assist people and help them to safety,” he told JoyNews.

He also noted the NADMO is sensitizing people on how to deal with flooding but urged the public to pay heed to Meteorologists’ forecasts on weather warning.

This, he said, is because flood has the power to drag people.