About 505,000 JHS graduates have been placed in various second cycle schools – GES 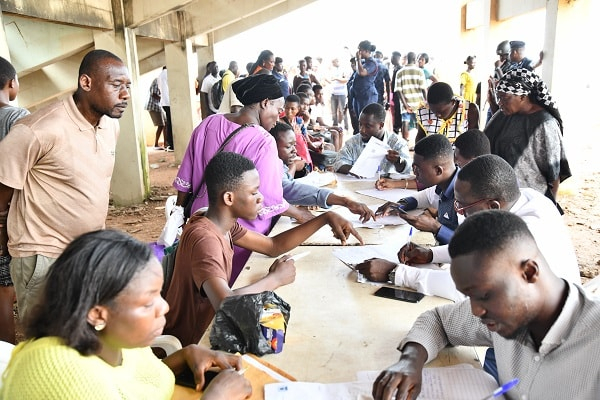 Some parents at the school placement centre

This figure represents approximately 88.6% of the about 570,000 students who are expected to be placed this year, after their successful completion of the Basic Education Certificate Examination (BECE).

In an interview with JoyNews on Tuesday, the Director-General of GES said the process has run smoothly so far.

Prof Kwasi Opoku Amankwah, however, stated that more is being done to correct the anomalies that have been reported to the Service.

“So far, it’s been good. Overall, there were about 570,000 students that were to be placed and as we speak now, about 505,000 of them have been placed. But those who have enrolled is something about half of that number because the enrolment has actually started with the school reopening.

JoyNews/AdomNews · About 505,000 JHS graduates have been placed in various second cycle schools – GES

“We don’t expect that we wouldn’t have issues; we expect that we’d continue to have issues and it is just because we don’t have enough space in each school that people subscribed,” he stated.

Currently, hundreds of parents continue to struggle to get schools for their wards.

Many of them besieged the national resolution center at the GNAT Hall on Tuesday to get their concerns resolved.

However, many who had placed their complaints as far as a week ago, are yet to receive any response.

But Prof Opoku Amankwah says the Service is putting more interventions in place to promptly address all such challenges.

He noted that government is working to revert to the old academic system and eliminate the Double Track System with a transitional calendar.

He said the policy would not be implemented for first-year students who have already started reporting to their various campuses.

“We are trying to bring back our academic year to the September-October start and then the June-July completion,” he added.

Meanwhile, the Education Ministry says adequate preparations have been done this year to ensure that first-year students do not go through the shift system.

The double-track system was introduced in 2018 to reduce congestion in schools and create room to accommodate the projected increase in enrolment of Junior High School students into Senior High Schools.

After its introduction, the system was heavily criticised by a section of Ghanaians who lamented that it could run down the quality of education.

But at a press briefing in June 2021, the Education Minister, Dr. Yaw Osei Adutwum noted that the system will be halted in about two to three years.

Fast forward, the Public Relations Officer of the Education Ministry, Kwasi Kwarteng says the double-track system will not be introduced this year.

According to him, the limited infrastructure situation that prompted the double-track has been improved.

“That whole idea about dividing students into two where within a particular year group, we have one group go to school and after some weeks or months, they vacate and the other one comes to school, this time around we are not going to see that arrangement again.”

“There has been significant improvement in terms of infrastructure,” he added.

He said GETFund had ensured the completion of about 1,400 infrastructure that had made it possible for the government to suspend the double-track system.

“In 2017, GETFund did an infrastructure review and realized that over 3,700 projects had been abandoned. Just after last year, over 1,400 of these projects have been done so clearly the result of this is accommodation to a large extent. So that brings a significant improvement in the accommodation situation we’ve been talking about.”

Mr Kwarteng further called on persons still having difficulty with placement to remain calm as the resolution centers remain open.

“Even though some first years are joining, our resolutions centres will still be there to help students who may have issues with their placements and will require assistance,” he noted in an interview on Accra-based Citi FM.