Advocates For Christ questions claims that LGBTQI+ orientations are genetic 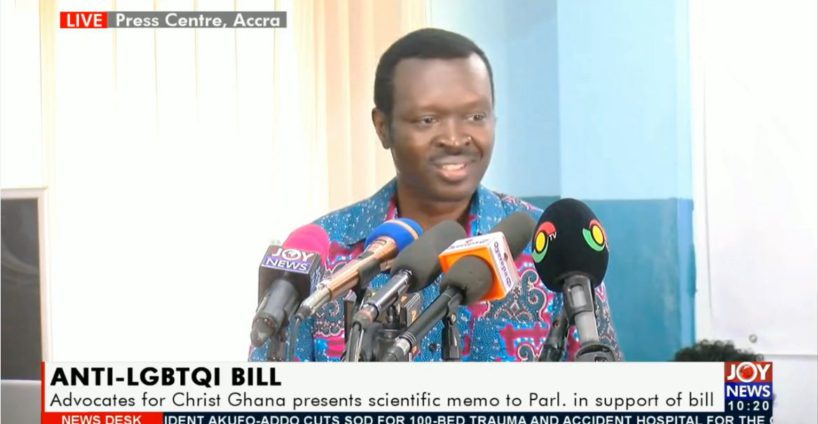 Advocates for Christ, Ghana (A4C) has questioned claims by the LGBTQI+ community that their sexual orientations are genetic.

According to the A4C President, Edem Senanu, the largest ever study reveals that these claims are unfounded.

This comes as Parliament collects memoranda regarding the controversial bill on Promotion of Proper Human Sexual Rights and Ghanaian Family Values 2021.

“The largest-ever experiment done worldwide is called the Human Genome Project. Some of the researchers investigating this looked at 500 million people in the world…established that culture and the environment account for 75% of the reason why people select a particular sexual orientation,” he said.

Briefing the press on medical and scientific research on the impact of LGBTQIA activities, Edem Senanu insisted that the LGBTQ+ community can only refer to their sexual orientation as a preference not a right.

A4C joins top clergy members and Islamic clerics who have presented a memorandum to the House’s Committee of Constitution and Legal Affairs on Wednesday, in support of the bill.

In its current state, the bill seeks to criminalise the activities of LGBTQI+ and individuals and organisations that advocate or promote the activity in the country.

However, a series of memoranda, which oppose the legislation, have been presented to the Committee. The sponsorss of the memoranda describe the bill as an endorsement of state-sponsored violence against minority groups and an infringement on their human rights.

But addressing the media on Friday, Mr Senanu asserted that their arguments had no genetic basis.

“Regarding the issue of whether there was any genetic basis for homosexual behaviours, they said there was no gay gene,” he explained.

On the back of these findings, Mr Senanu concluded that “the LGBTQIA+ proponents cannot claim that they were born that way.”

Meanwhile, the Church of Pentecost has sent its strongest caution yet to the government regarding the legislation.

National Chairman of the Church, Apostle Eric Nyamekye, says his outfit will vote out any political party that stands against the passage of the Promotion of Proper Human Sexual Rights and Ghanaian Family Values Bill.

Meanwhile, the president of COMOG, Abdul Raman Abdel Rakman, is calling on Parliament to telecast the LGBTQIA discussions live for all Ghanaians to watch.

Parliament says over 100 memos have been received in respect of the bill so far, from citizens and stakeholders worldwide.