AFCON 2021: There is no excuse for our performance; we have disappointed Ghanaians - Kofi Kyere - MyJoyOnline.com

AFCON 2021: There is no excuse for our performance; we have disappointed Ghanaians – Kofi Kyere 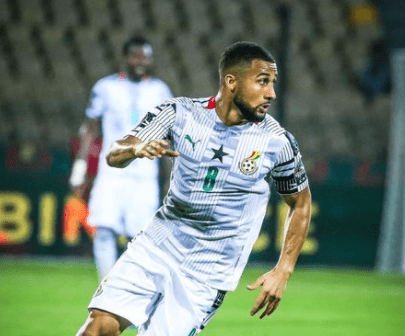 Ghanaian forward, Daniel Kofi Kyere, has conceded that the Black Stars did not live up to expectations in the 2021 Africa Cup of Nations being held in Cameroon.

He acknowledged that the senior national soccer team has disappointed Ghanaians and all who invested their hope in the team.

In an Instagram post, following the Black Star’s early exit, he said: “There is no excuse for our performance in this tournament, we have disappointed our country and the people who believed in us.”

According to the FC St. Pauli forward, all efforts will be put into making the Black Stars great again to ensure it becomes a force to reckon with in subsequent games.

For Kofi Kyere, “there is no time to talk much, but time to show that we will do it better in the future.”

“I believe where one door closes, another one opens. So we have to keep moving and trust God‘s plan. This is the beginning of a new chapter,” he added.

Prior to the 2021 AFCON tournament, President Akufo-Addo, former President John Mahama, Members of Parliament and the general public made known their unwavering support for the Black Stars.

According to them, the current team has what it takes to bring home the fifth trophy and end the 40 years cup drought.

“The task may be daunting, but it is certainly not insurmountable. I believe that in the current crop of players, we have the talent to match any of the best teams on the continent. We can make the Black Stars a force to reckon with once again on the continent and world football beginning with this tournament. Go for gold, go for the fifth AFCON trophy.

Despite the encouragement, the Black Stars were unable to deliver; breaking the hearts of many.

The Black Stars of Ghana on Monday, January 10 faced Morocco in their opening game at the 2021 Africa Cup of Nations.

Many were concerned about the not so encouraging start; however, still hopeful the Black Stars will stand on their feet in their subsequent games.

Their third and final game in Group C against Comoros became the fate deciding match. The Black Stars on Tuesday, January 18, blew away their chance and were sent packing. Comoros beat them by 3 goals to 2.

What next for Black Stars after AFCON

Meanwhile, the Ministry of Youth and Sports has summoned the leadership of the Ghana Football Association (GFA) for a meeting following the painful exit of the Ghana Black Stars from the 2021 Africa Cup of Nations tournament.

In a press statement, the Ministry said an emergency meeting will be held on Friday, January 21, to “urgently discuss and take decisions aimed at salvaging the performance of the Black Stars, especially in the next set of games.”

This follows calls for the disbandment of the current Black Stars team and the removal of head coach, Milovan Rajevac.