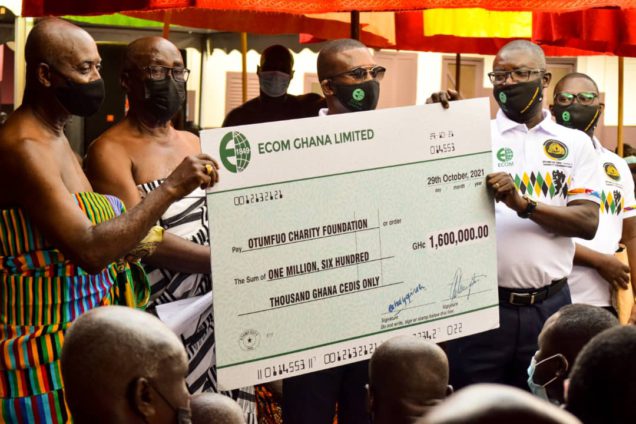 Agroecom, a licensed Cocoa Buying Company which operates the largest sustainability program in Ghana has extended its support to the “Otumfuo-Agroecom Mobile Learning Project” for another four years.

The General Manager of the company, Richard Suwli, who announced this explained that the new sponsorship which is between the periods October 2021 to August 2025 has a sponsorship package of Gh1.6 million.

He stated that the management’s decision to extend the project for another four years was due to the influence the project had on the target and the benefits to many Ghanaians in general.

In October 2017, Agroecom Ghana Ltd in collaboration with the Otumfuo Charity Foundation launched a project dubbed “Otumfuo-Agroecom Mobile Learning Project” at the Manhyia Palace in Kumasi.

After the launching of the project, a team from the Otumfuo Osei Tutu II Foundation visits various regions, communities especially hard-to-reach hinterlands with assorted books, computers, and cinema vans.

The team which usually stays in the communities for a couple of days assist the children to read the books, undertake the teaching and learning of computers lessons among others after which they use the mobile cinema vans to show to the people especially cocoa farmers best practices in cocoa farming, an exhibition of Asante cultural practices among others.

Benefits from the project

Over the 4 year period, the project gave access to reading and practical ICT lessons to 62,646 school children in 107 communities across 28 districts in Ghana.

As an organization focused on alleviating poverty among rural farmers, Agroecom sponsored the first phase of the project to the tune of ¢1.4 million by providing resources including a mobile van, a pick-up (4×4 vehicle), large quantities of reading and customised exercise books, 70 pieces of laptop and desktop computers, power generator set, LCD projectors, a video camera, a projector screen, a set of audiovisual materials, and additional quarterly overheads recurrent expenditure of ¢71,448 towards a successful running of the project.

The General Manager said, over the last five years, Agroecom has worked with over 140,000 farmers resulting in premium payments and community infrastructure developments of over $40 million in the Ghanaian economy.

He stated further that the partnership between Agroecom and the Otumfuo Charity Foundation has benefitted the nation a lot because both organizations shared the same socio-economic vision of improving rural education and also alleviating poverty among rural farmers.

The General Manager of Agroecom said, “as this 4-year duration starts, we plan to enter into new areas aimed at giving the less fortunate children in deprived communities’ similar learning conditions to children in bigger communities, and providing education to promote rural prosperity”, as this fulfills Agroecom’s strategic vision of “Increasing Prosperity in Rural Communities”.

We also believe that the farmer has the right to access quality agro Inputs at the most affordable price. We would offer the farmers COCOBOD approved agro-inputs, change the way the farmer is educated on the agro-input and farm machinery usage by offering training and guidance by the use of the Mobile Cinema Van.

The Board Chairman of the Otumfuo Osei Tutu II Foundation, Nana Prof. Oheneba Boakye-Adjei Woahene II, on behalf of the Asantehene Osei Tutu II, lauded the Management of Agroecom for the support for the past years as well as the renewal of the project for another four years.

He charged other institutions operating in the country to emulate a good example of Agroecom to complement government effort at promoting the development of communities they operated from as well as helping in the fight against poverty in the country.

The Board Chairman assured the leadership of Agroecom of Manhyia Palace readiness to support their operations as well as manage the resources for the project prudently to merit the purpose of its establishment.