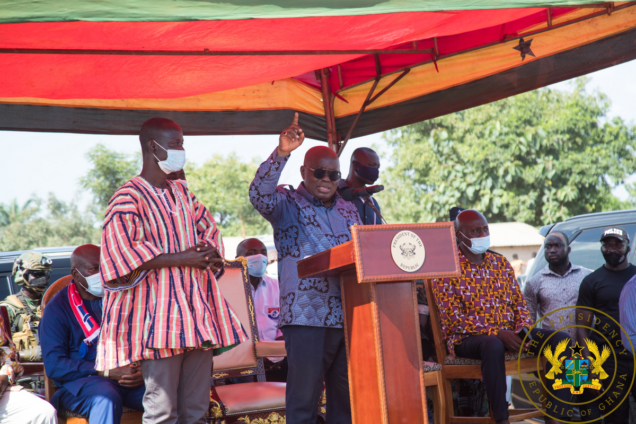 The project which was commissioned on Thursday was undertaken in three phases by Messrs First Sky Limited, at a total cost of ¢156 million, and was funded by Cocobod, with the Ghana Highway Authority serving as the implementing agency and supervising consultant.

The project was originally programmed for completion in twenty-four (24) calendar months at a combined contract sum of ¢176.5 million.

However, to ensure value for money, the Ministry of Roads and Highways, acting through the Ghana Highway Authority, reengineered the project, and resulted in savings to the nation of some ¢20 million.

The completed road project is expected to enhance the production of staples, fishing, trading and the other economic activities in the three districts of Nchumuru, Krachi East and West, and will also serve as a major route for the transportation of yams from Oti and northern regions of the country to the south.

Additionally, the Ministry of Finance and the Ministry of Roads and Highways are almost through with negotiations with Messrs FDN/ INTORL, a Dutch company, for the design, finance and construction of a 1.6km prestressed bridge over the Oti river at Dambai/Dodiokope.

Feasibility studies have been completed for works to commence upon receipt of the requisite approvals from Cabinet and Parliament, and, once completed, it will bring relief to residents who live along the catchment area and for traders who ferry goods and services across the Oti river.

Together with the Eastern Corridor and other completed, ongoing and planned road projects within Oti region, the bridge will enhance agricultural production and other economic activities in Oti region; especially Nchumuru, Nkwanta North and South, Krachi East and West Districts.

Prior to the commissioning ceremony, the President inspected ongoing work on the construction of town roads in Kete Krachi and Chinderi, the capitals of Krachi West and Nchumuru Districts respectively.

The construction of these roads, according to the project co-ordinator, Messrs First Sky Ltd. is to give Kete Krachi and Chinderi a complete facelift to befit their status as district capitals, with both roads receiving 10 kilometres of asphaltic concrete overlay on their arterial and collector roads. The remaining roads will be upgraded to bituminous surface dressing finish.

The project, which commenced on October 2, is scheduled to be completed within 12 months, at an estimated cost of ¢58,989,255.95, with funding from Consolidated Fund.