'Amend LI that bans motorcycles from operating as taxis' - MyJoyOnline.com

‘Amend LI that bans motorcycles from operating as taxis’ 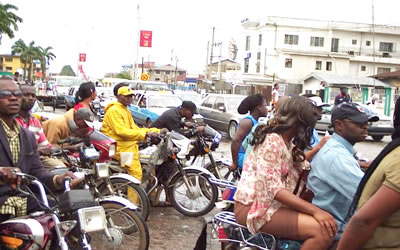 A former Commander of the Motor Traffic and Transport Department (MTTD) of the Ghana Police Service has urged Parliament to amend the Legislative Instrument (LI) that bans the use of motorcycles as taxis (Okada).

In 2012, the use of motorbikes for commercial transport in the country was outlawed under Regulation 128 (1 – 4) of Road Traffic Regulations 2012, which states: “The licensing authority shall not register a motorcycle to carry a fare-paying passenger.”

But Assistant Commissioner of Police (ACP) Mr Victor Tandoh (retd) has said the amendment of the LI would allow the police and other authorities not only to regulate the activities of such motorbikes but also identify and educate Okada riders on road signs, safety regulations, as well as the proper use of motorbikes.

“Today, almost all Okada riders do not consider themselves as users of the road and are not only flouting road regulations, killing and maiming many patrons but also knocking down pedestrians,” he said.

Mr Tandoh made the call when he shared his views with the Daily Graphic on how road safety could be improved to reduce the carnage on roads in the country.

Figures from the National Road Safety Commission (NRSC) indicate that in 2015, some 2,289 motorcycles were involved in road crashes nationwide, while in the first quarter of 2017 about 708 road users died from 4,049 road accidents, with 3,983 others sustaining varying degrees of injury.

Between 2017 and May this year, the Trauma Unit of the Korle Bu Teaching Hospital recorded 2,563 cases of Okada accidents.

Mr Tandoh said the police had, in the past, almost succeeded in stopping the use of motorbikes as taxis (okada) in Accra, but its efforts were defeated, leading to increased indiscipline by Okada riders on the roads.

According to him, while the law prohibited the use of motorbikes for commercial purposes, most politicians saw the introduction of Okada as a way of providing jobs for “the boys”.

“While the police are not against Okada, I think politicians must help enact a law to regulate the operations of Okada riders. Today, some Okada riders sit three and four people on their motorbikes and the insecurity is so much. Go to the hospitals and you will see a number of victims of motorbike accidents with their legs hanging or cut off,” he said.

He noted that due to the absence of legislation to back the operations of Okada in the country, insurance companies were not prepared to insure Okada riders and users against accidents.

“So if politicians think Okada is a way to create jobs for the boys, there should be a law to back it, so that we can identify those who are Okada and those who are not,” he stated.

Touching on various factors contributing to road crashes, Mr Tandoh expressed worry over faded road markings and dysfunctional traffic lights that had remained unattended to in Accra for a long time.

For instance, he cited the traffic lights at the Palm Wine Junction near the Accra International Trade Fair Centre and the American House Intersection at East Legon, both of which had been off for almost two years, saying that caused crashes on the roads.

“Today, many road guard rails that are to protect vehicles have been knocked down and not been replaced, contributing to accidents,” he said.

While blaming drivers for engaging in reckless driving, such as speeding and wrongful overtaking, the former MTTD boss said many drivers who felt tired refused to listen to their fatigued bodies, often leading to head-on collisions on the roads.

“Drivers always think they can chew some cola and drink coffee as a stimulant to beat sleep, but when you are tired, you can never cheat nature. When you begin to feel the symptoms of yawning, the cola and the coffee cannot save you.

“If drivers will change their behaviour of unnecessary speeding and overtaking and listen to their bodies when they are tired, it will go a long way to avoid some of the uncalled — for accidents,” he advised.

While expressing worry over the increasing instances of drink-driving in Ghana, Mr Tandoh said most drivers, particularly private ones, often engaged in drink-driving on weekends, largely contributing to the high rate of accidents.

“Our data on accidents show that most accidents occur in the evenings of Friday, Saturday and Sunday. All these are happening at a time alcohol is being promoted and people are showing interest in its consumption.

“Now if you pass by popular pubs in our communities in the evening, you will see many private vehicles parked by the roadside and you will not see trotro and taxi drivers,” he stated.